What You Can’t See Doesn’t Matter—At least they hope so! 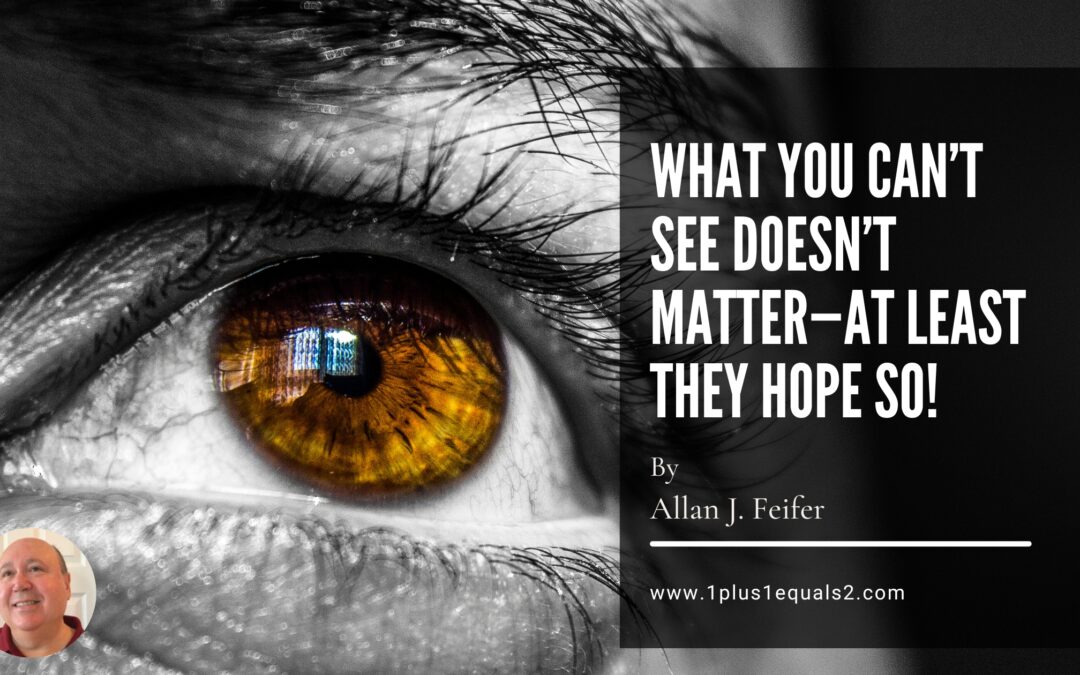 Today’s article is a bit of a manifesto. It seeks to be a compact primer on the “big picture.” It covers a lot of ground with a minimum of detail to hold your attention and to get across a complicated subject in an understandable way. Everything we talk about could be put into a flow chart to better help you see and understand relationships between the pieces that by themselves don’t reveal their dastardly intent. I hope you stick with me for a moment as you get a graduate-level course in six minutes of reading.

To understand the political big picture, we can comfortably divide the country into three distinct groups:

I will be criticized for throwing out a set of unknown numbers. But, the three classifications are real and can be logically inferred. Throughout history, there have always been Insiders, Outsiders, and those with the means and desire to change the status quo. Would any of my readers believe for a second that there are not those among us that more than worry that our system and history of governance are systematically being destroyed piece by piece and right in front of our eyes? If you agree, welcome to my world. You believe in conspiracies. All Juntas, revolutions, revolts, and takeovers must initially remain concealed before their enactment, for obvious reasons. Our Founding Fathers were engaged in a conspiracy to overthrow the British by force in an extra-judicial fashion. So, quibble with my numbers if you may, but don’t throw me out of hand my comments because they lack certainty or specificity.

For those unaware of what the Great Reset is, educate yourself quickly. Understand how it will affect your ability to live, work, and raise a family and the coming limitations you are already starting to face. You will be forced to make a choice to either surrender and take what comes or fight back. There is no third possibility.

Now is the time to formulate a plan of resistance and to join with others who will not, under any circumstances, be a party to subjugation by some world governmental overlord. If you think this is impossible or just zany, at best, look up at Europe today. Look at this Wikipedia definition/explanation of what the EU is all about.

“The European Union (EU) is a supranational political and economic union of 27 member states that are located primarily in Europe.” The word supranational means “empowered to directly exercise some of the powers and functions otherwise reserved to states.” In effect, the EU is superior to individual countries, individuals, and their laws.

Do you wish to retain an independent America, or just be a member state in a world government?

This is the war being fought today, here in America. For some time, the Destroyers have, quite openly, been creating conditions so that, sometime in our future, during the depths of some great and threatening societal disruption event, we will be extended an offer to join the EU or some other supranational group.  We may have few choices before us as the Destroyers have created monumental chaos within our own country already. Read Allan’s Rule Number Two: “An empty belly will follow anyone.”  All that is required are weak-minded, hungry, empty people vessels that the Left is creating by the thousands each day through an invasion of people crossing our border virtually unimpeded, draining our resources at an alarming rate.

The country will have two opposing sides at war. There are about 25,000 insiders who make all the primary decisions while perhaps 5,000-10,000 people (mostly unknown) quietly work to save our country and our identity. What characterizes Insiders is a combination of ideology, wealth, privilege, power, and corrupt intent. As to the 5000 to 10,000 Warriors, two unifying descriptors identify who they are. Warriors and Patriots. They still believe in that sacred oath of fealty that our Founders took when signing our Declaration of Independence:

“And for the support of this Declaration, with a firm reliance on the protection of Divine Providence, we mutually pledge to each other our Lives, our Fortunes, and our sacred Honor.”

The last word “Honor” may seem old-fashioned today. But it speaks to the central issue of ethics. And when I think about the importance of ethics, I immediately think of the majority of people who think ethics is entirely situational.

Miriam-Webster’s definition of Situational Ethics is:

“The position that moral decision-making is contextual or dependent on a set of circumstances. Situational ethics holds that moral judgments must be made within the context of the entirety of a situation and that all normative features of a situation must be viewed as a whole.”

While honor is defined as:

“a keen sense of ethical conduct, also known as Integrity”

Words like Honor Ethics and Integrity seem so quaint and old-fashioned to many of us today. Go ask anyone (particularly those under 40) to even define what those three words mean and you’ll likely be shocked at their answers.  Why are we surprised that too many live with a moral code that is entirely situational? That is the reason so many of us have no anchoring, and drift to and fro unpredictably and chaotically. It is the reason so many of us have turned inwards and think little of the exterior problems that will determine our future health, prosperity, and even our very longevity. A detached reality is allowed by a rich society that temporarily subsidizes lifestyles and insulates many of us from reality.

The insiders/Destroyers possess a powerful weapon that allows them to do their worst and get away with it; at least temporarily. That weapon is borrowing and creating debt. By controlling the narratives, reinforced by authority figures such as politicians, teachers, theologians, and yes, even sometimes misguided parents; is it any wonder so many are adrift?

We are told that our national debt is unimportant. I think this leftist mainstream pablum is utterly dangerous. $31 trillion is the official national debt, but the actual debt may exceed $100 trillion in unfunded mandates that will eventually have to be paid. But today’s article is not meant to be about economics. We are simply revealing the means and methods that have allowed the Destroyers to inject their poison pill into our country. That antidote will require radical surgery in the form of a reduced standard of living to come so that our income and spending come back into balance.  Joe and Jane just want to be left alone to live their lives in peace. Their rude awakening is inevitable.

Our current high inflation is an indicator that there is no safe haven. Inflation is a tax. Don’t let anyone tell you that inflation was unanticipated. Inflation is caused by too many dollars chasing too few goods and services. The government has flooded the economy with dollars in response to a purposeful decision to shut down the economy. Some in government were happy to create the conditions for inflation. If this inflation ‘tax’ remains around long enough, it will debilitate our country and help to facilitate its fall.

Political unrest, foreign meddling, and lack of economic resources, not to mention the distraction that the effects of inflation caused, weaken us and leads to where we are today. The next jump to what many Americans might see as an attractive and safe alternative to a chaotic America just might be to join some kind of version of the EU.  Chaos puts everything on the table, my friends.