What We Can Do to Stop Inflation 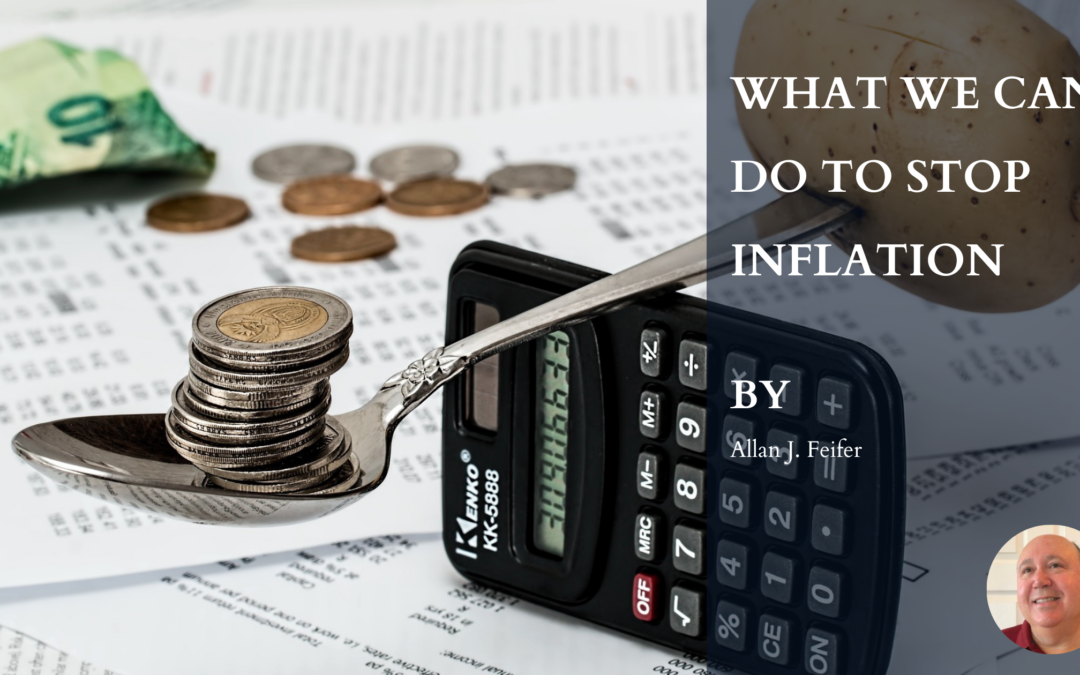 My first blush takeaway from the mid-terms is how disaffected so many of us are. Feeling poorer through inflation is just depressing. This includes the psychological damage felt when your loved ones are also hurting. Our society is inarguably in steep decline with no end in sight.

But what if there was a way to immediately change such a negative outlook? I can conceive of a way to fix the most basic problem that led us to where we are today. One which won’t have the Treasury print more worthless dollars in an attempt to make you feel better or that supports the bastards that did this to us in the first place?

What can we do that would change the current dynamic and slay the inflation monster in no more than 12-18 months? See that the cost of oil and natural gas decline to what they were before Biden came to office.

It must be recognized that we are in an economic war with some very bad actors. We’ve made some unforced errors that have now come home to roost. High oil and gas prices – have pulled the rug out of the American economy and our psyches in several key ways:

None of this is a secret, hidden from policymakers and others that pull the levers of power. So, why is it this way?  Politicians and those always present Destroyers must hold your attention, making you ever fearful, dependent, and despondent so that you continue to be easy to manipulate to accept their policies and actions. Such people are your enemies and they do exist in significant numbers.

We are kissing up to the likes of Nicolás Maduro of Venezuela, the Ayatollah Khamenei of Iran, Putin in Russia, and MBS in Saudi Arabia.  These are terrible options for our democracy caused by awful policy mistakes made by Biden. Inevitably, concessions were/are being made against our best interests. Dealing with outright enemies, or even potential enemies carries a cost that cannot honestly be quantified or verified. We are bearing our throats to some of the worst actors in the world. What good can come of that?

Wouldn’t we rather not be forced to make that Devil’s bargain in the first place?  We should be independent of foreign energy, both in peacetime and especially when we are at war.  But, did you know that Biden has now drawn down half of our Strategic Petroleum Reserve to boost his favorables?  Even more threatening is the dramatic reduction of our reserve of Diesel Fuel; that is down to 25 days! If the supply of Diesel for trucks and engines were cut off tomorrow, widespread panic would ensue in many urban environments.

Ever heard of the term Stalking Horse?  The government uses energy price issues to divide us along our various fracture lines. On the Left, high energy prices work to force people into the use of “Green Energy”, already a lightning rod issue. On the Right, enforced high energy prices represent the government reordering our economy in a manner that most find unacceptable.

It does not help when President Biden tells us what he intends. On November 6th, Biden said “No more drilling and plans to shut down coal power all across America.” Coal, oil, and gas represent 79% of our total energy use today.  These are the words of a raving maniac, who believes it is better to live in the dark and cold, rather than maintain our standard of living.

High energy prices dramatically affect our cost of living. Not just for gas or heating oil, but also all the derivative products like plastics, pharmaceuticals, shipping, and travel to name a very few of the tens of thousands of petroleum-based products we need to maintain our standards of living.

The path forward to much less expensive oil is an innovative, “all of the above” Marshall Plan.

It’s a dangerous world out there and this is how to fix it. If there is less energy competition around the globe, we might actually have less war, less suffering, and peace to give way to a better world for all. This is an aspirational goal everyone should be able to get behind.

We used to do the hard and necessary things but we seem to be unable to do them any longer. I suggest that this be our next moonshot. Let us serve the world with bountiful energy at affordable prices, while making a profit for shareholders.

There are two worlds we can live in. One that is fanciful and does not exist. The other may not be as easy, but it’s the hard decisions that make a difference and challenge us to be our best.  Which will we choose?

The fact that we have a President who won’t do any of these things is sad but immaterial. We must be a nation of ideas so that we can have debates that can change minds to arrive at a consensus. The marketplace of ideas will eventually win and this terrible place in history will be replaced by a more hopeful one. It starts with a belief that nothing is static. The next step is to act!