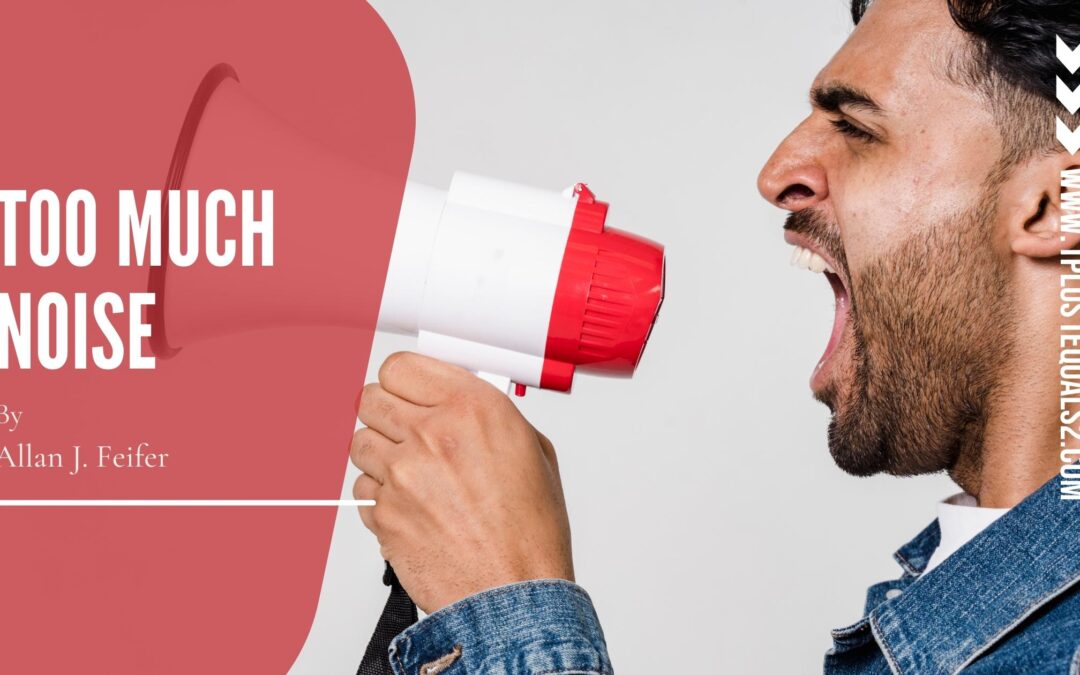 Today’s story spotlights the downward spiral of the Biden Administration.  Myriad crisis-level issues abound.  Almost all go unresolved amid the overwhelming “noise” created by constant emergencies.  Policy and action are all gridlocked, great fear and consternation among our allies, all of who know all too well, Biden’s inability to govern.

At my local homeowner’s association, there’s a joke that the Board may change, but the issues are always the same. And, so it is with our nation’s problems. Today, government solves little but tries to manage everything, usually to the minimum acceptable consensus level so that they can then move on to the next pressing issue. The “Noise” of an issue (how much press, attention, and urgency of an issue) determines how our leaders react and how they spend their time or spin an issue.

On February 24th, Russian armor crossed the frontier from three separate directions with the intent to topple Ukraine in a 72-hour blitzkrieg. America had not delivered significant quantities of lethal aid as had been requested and now was in panic mode. In fact, on February 26th, Biden ordered US planes to stand by to airlift President Zelensky, his family, and other select Ukrainians out of harm’s way. Biden believed that Ukraine would soon be no more and he wanted no martyrs. Everything said and done before the invasion was window dressing to appear to be a staunch ally. Biden made the calculus that there was insufficient political capital to gain by saving Ukraine.  Drumbeats of the Afghanistan debacle rang loudly in his ears.

When you think strategically, you don’t react to individual events, trendlines or objectives.  Personal core principles inform your actions. Biden does not think strategically. Biden reacts to perceptions and emotions, and by his actions, creates a personal reality that is frequently at odds with the truth.

When Zelensky did not play along and famously said, “The fight is here; I need ammunition, not a ride,” Biden got a finger in the eye. Zelensky’s statesmen-like pronouncement was the moment President Biden no longer controlled that narrative. Biden’s initial plan to stay out of the war was now out the window. In essence, Zelensky was leading America, not Biden. “Noise” had set Biden’s agenda.

Today’s article is about two things that merge into one:

Ukraine can be used as a proxy to explain other decisions. Biden never intended Europe and the US to become embroiled in a proxy war with Russia. He was willing to sacrifice Ukrainians. Biden did not want to divert us from his focus on Climate Change/Social Change. Unfortunately for him, unexpected events sometimes take precedence. Ukraine did not lie down and die as Biden expected. Ukrainians decided to live or die free, rather than living on their knees.

That kind of national pride is something, we Americans seem to have forgotten. I was taught Freedom is not free. The under-50 crowd believes freedom is a given.  Only now may some of our over-parented young and listless children start to get a glimpse of what real life doesn’t guarantee!

Sending a plane to save Zelensky was really about saving Biden politically. It was at least 60 days later before our intelligence services and the Pentagon began to believe that there was a path forward for Ukraine to survive.  This change created an existential crisis for the Biden Administration and highlights how Biden’s thinking forced him down a path of action he did not choose.

But, exactly what kind of action? This is the most telling part of the story. The choices that confronted Biden were:

Biden got his political advisers together and his favorite focus group to formulate our vital (for him) public relations response. Keep in mind that the table was already set back in 2014 when Obama and Biden blinked as Russia invaded Crimea and Eastern Ukraine.  Obama was frozen at the switch and reacted by loading up B52s with a load of rhetoric and bombing the stuffings out of Putin. Take that Vladimir!  And, to add insult to injury, we would not recognize Putin’s war gains and we would throw in a few of those feckless sanctions for good measure.

Keeping Ukraine in a de facto stalemate appears to be Biden’s plan and answers the question as to why we don’t provide Ukraine with the weapons needed to win. By now, it’s clear that Russia’s conventional forces have been paper tigers. The US believes that Putin’s nuclear gambit is just that; a gambit regardless of what comes out of his mouth at the moment.  I am struck speechless that we have not taken the steps to communicate our position to the world so that there are no miscalculations by Putin. Absolute unity is required or Putin will exploit any fractures. Biden should be speaking to Congress, the American People, NATO, and the UN constantly on this singular topic. It’s vital!

Remember the movie, Dr. Strangelove? In the movie, Russia’s Ambassador to the US tells our President that Russia has a doomsday weapon. Our President asks the Ambassador why is this weapon secret? After all, why have a deterrent that no one knows about? Our present situation is kind of like that. Putin retroactively stated that the Eastern regions of Ukraine have now become Russia proper, and continued fighting there will trigger a nuclear response.  Wacko!

But the world shouldn’t, can’t, and mustn’t tolerate nuclear blackmail. World leaders, philosophers, politicians, and every living and thinking individual all understand it’s like the final lesson from the movie War Games, in which all learn that the only winning strategy is not to play at all.

Biden’s fatal flaw is that he is an inveterate liar and a fraud. For example, during the 2020 election cycle, Biden claimed to have graduated in the top half of his class with three degrees. But instead, research shows that Biden graduated with one law degree from Syracuse University, number 76th of 85 in his class.  Biden has never worked outside of government. Yet, he is more than willing to use his judgment in forcing the reordering of the greatest economy of all time, without discussion and conclusive evidence to support his actions.

Biden’s talent is his understanding of the importance of managing narratives. It does not mean he’s good at it. Always politically astute, but more like a python that senses, rather than understands where his next meal will come from. And like a python, two things are true. One, he lives according to instinct. Two, he goes hungry a lot, since instinct will only carry you so far.

At the end of the day, smarts count, with Biden number 76 out of 85 in a lower-ranked school, you have to be concerned. “Noise” that Biden hears constantly, is a scary way to run a country.