The Buffalo Shootings – The Story Behind the Story 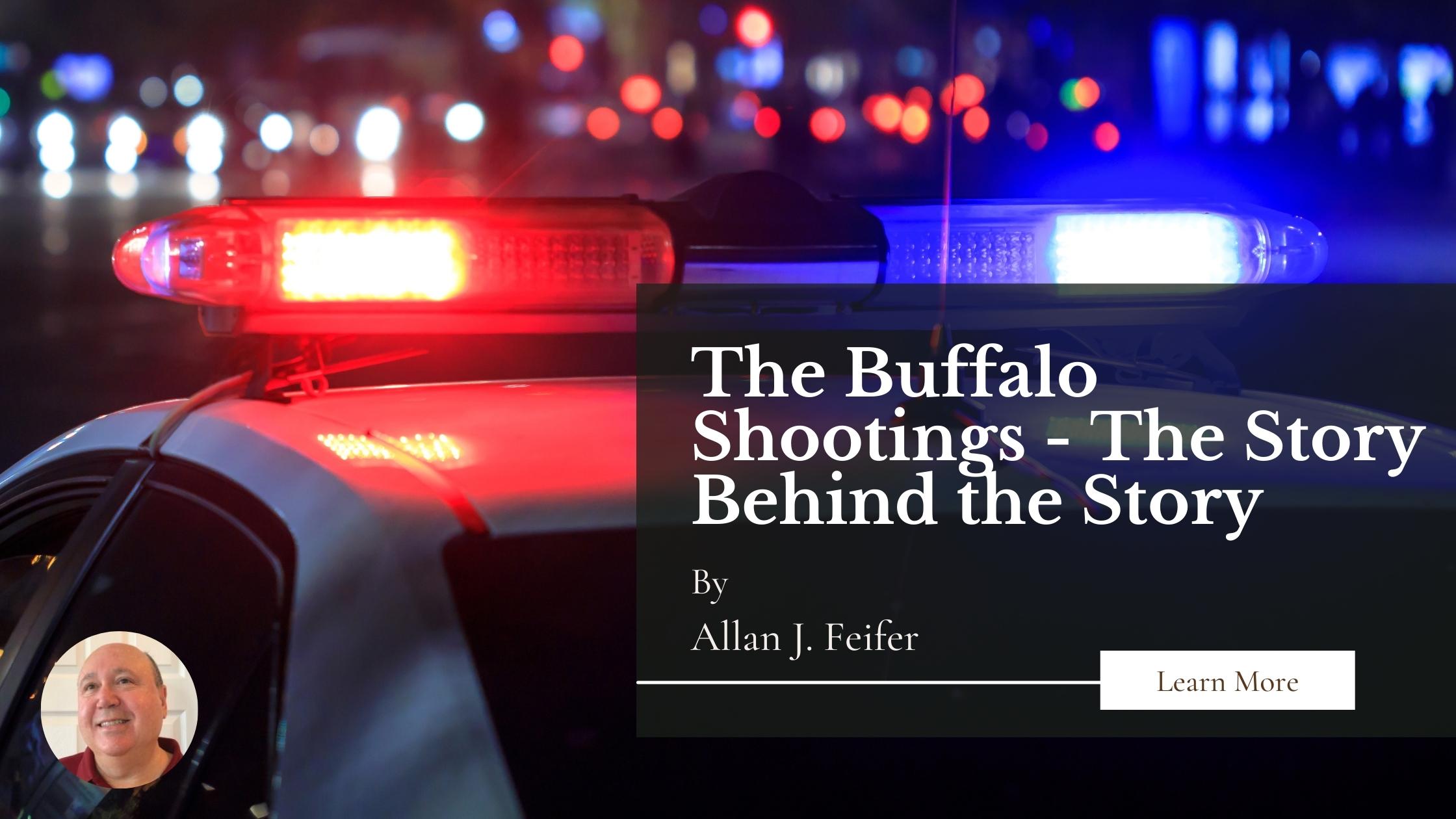 Saturday’s mass shooting event is a tragedy. The even greater tragedy was that it was both foreseeable and preventable; but not in the manner you might think. I’ve been searching for a pithy comment that embodies the senseless war we have created in this country to no avail. That war serves a political interest for some, I suggest, in particular, the Democratic Party.

First, let’s start with what we know about Saturday’s events:

1. An 18-year-old shot and killed black people that he targeted
2. The individual (we won’t use his name so as not to empower him) was the subject of a mental
health investigation last year while in high school and was on a “watch list”
3. We don’t know what radicalized him, but we do know he was very active on social media
4. We can also reasonably assume that this individual’s perception of reality was guided by
confusing and emotional arguments dealing with the European idea of “Replacement Theory”
even if he did not know it originated in Europe.

Check this Out – Where Have All the Workers Gone?

These are the facts. But they don’t tell the story. You have to ask yourself, you have to wonder, how is it our society is creating so many “defective” individuals that somehow think they are heroes for taking other people’s lives? What empowers them? What allows them to not only exist but to thrive in today’s America. We’ll attempt to answer that question and others in this post.

Let’s deal right off the bat with something that highlights how absurd we’ve gotten, and in the process how we create the kind of societal pressures and reactions that we should abhor. Black Pride, Gay Pride, Hispanic Pride, White Pride, pick which of these four statements is largely considered hate speech by the left? Unless you are in LaLa land, White Pride is a guaranteed pick. The narrative is that whites should possess white guilt and are implicitly racist. Therefore, how can they have pride in their race? Balderdash! All races, religions, and people from other nations can and should have pride in who they are and where they are from. What moron wants to stand there and tell me that all whites should be tarred with the same brush? How many whites are white nationalists or white supremacists? Nobody knows. The left would like you to believe the number could be 50 million. Another says everyone who voted for Donald Trump. Another says 78% of all the murders in the US are by white supremacists. The problem I see is that those groups that make these preposterous claims want the numbers to be high to support their views, but it’s a huge lie. Yes, there are a few thousand (or even tens of thousands) that belong to extremist groups, with many of those in prisons. It is neither a huge number nor a rapidly growing number relative to our population. If you think I am wrong; quote a reliable unbiased source. So, go ahead white people. You have just as much right to be prideful as any other group, maybe more, at least here in America. Because it is a fact not in dispute, that predominantly white people, through their will, courage, and creativity, created the greatest nation on earth. Can anyone with half a brain really disagree? Yup, warts and all, this is/was a country that created the concept and fact of opportunity for all.

There is real anger in this country. America has become a Race Centered Society. Republicans, by our nature, don’t see things through a lens of race; Democrats do. Their litmus test of fairness is the equality of results. Keep in mind that Republicans freed the slaves and Democrats (individuals, not the Democratic Party) founded the KKK. That is true history that Dems don’t want you to know and understand. Democrat policies encourage race-baiting. Democrats historically discriminated against people of color for more than 150 years while screaming at the top of their lungs how much they love minorities.

Look at the stillborn product of their efforts. After embracing black people and essentially adopting them through the Great Society Programs created in the 60s and ever more supercharged today, blacks are economically, socially, and criminally still on the bottom rung of the ladder. Black families used to enjoy the same intact families that whites did. Now intact black families are far too rare. We reap what we sow.

Mass Immigration is exacerbating racial frictions and will hurt those on the bottom more than at the top; at least for the short term. Eventually, the burden of caring for untold millions of illegals will break our country financially or just weaken us to the point where we will collapse economically or militarily. It is easy to see what is happening right now. Instead of putting troops on the border to repel the millions coming here, we put out the welcome mat. Guess what! People come in droves while our feckless leaders make-believe all is well. This is more than just an irritant to those that go out and work each day and pay their taxes. Many see this as another reason they feel that they are under attack. Frustrations have been rising for a long time, my friends. It’s no wonder that a few crazies do the unthinkable.

America’s focus on race is a cancer. As I state over and over, America can’t guarantee success, but it can and should guarantee an equal start. But this can only be realized if we are race-neutral in our thinking. With trillions of dollars spent on programs designed to equalize results, the opposite has happened. A neutral outside observer would have to conclude that the vast majority of government programs only created a society of dependent individuals, black, brown, and now, increasingly white. Was that their intent from the start? The Replacement Debate is an obvious result of extreme nervousness on the part of our population that is without a doubt, under attack, i.e., white people. We could write an entire book on the subject and not settle it. It is an undeniable fact that unchecked immigration, of a kind never seen before, is changing the racial makeup of our country. That’s another fact that will see you accused of being racist if you simply want to have a debate on the subject. And, that’s one of our central themes today.

The left seeks to suppress free speech. That’s my problem with moderation (censorship) on social media platforms and verbal and written speech everywhere else. We never had taboo subjects as we have now. People are uncomfortable with being forced to accept views, laws, and policies that are more like enforced directives. It flies in the face of free people who are used to arguing their points in a libertarian manner. Free speech today is a function of the domain you are in and their particular political leanings. That’s scary. Free speech should be just that, free speech. Yes, free speech can be troubling at times, but there is no alternative. Either speech is free or it is not. I sure hope we come to our senses before it is too late. My free speech trumps your need for safe spaces every time!

The Story Behind the Story:

If there is evil in men’s hearts, then I think that politicians in general and many ostensibly devoted civil servants are the Devil’s Handmaidens. After the end of the Second World War in interviews with soldiers, bureaucrats, and most of the captured leaders of the Third Reich, two things were consistent: first, everyone was just following orders and second, nobody saw anything untoward at the time. I’m Jewish so I maintain there is a special place in Hell for those guilty not only of mass murder, but the millions of minions, for which if not for them, nothing like that could have happened. Yet, even with the knowledge not so far back in time of the Holocaust, I could see it happen all over again. And, nobody would step forward and say “enough.” Exhibit A is Ukraine right now. Hitler has a new name…Putin. But, enough of that for today.

Government is awful at social engineering and has been the actual culprit that has completely divided us. They accomplish this all by themselves. If their failure is so obvious, then why is the Democrat Party continually doubling down on this tactic? The saddest fact of all is that the shooting that occurred in Buffalo has become another exploitable event. See Biden going to Buffalo to “heal people” and to use this crisis de jour to advance other agendas, like increasing his standing and that of Democratic candidates. Rahm Emanuel with his statement about “never waste a crisis” would be proud

Check this Out – Symbolism and the Democratic Party

The most horrible message of all, communicated to young impressionable minds, both black and white, is that who they are is largely determined by the color of their skin. What a horrible statement that is. While seldom stated out loud, it is painfully obvious that the government is communicating clearly to minorities, “You can’t make it on your own, you need us to pave the way and reserve for you a special place in line because you can’t be successful on your own.” I can’t imagine the irreparable harm this message does to the psyche of black people. The messaging directed at white people is just as bad. They are led to believe they are potential slave owners themselves, irredeemably white. Thus, their misplaced anger is once in a while unleashed by some crazy impressionable individual on innocent people of color. A direct consequence of the government manipulating people’s minds at a very basic level. We have identified the enemy.

Instead of yelling “My Body, My Choice” or like so many other slogans, perhaps the message that should be screamed the loudest by people should be “Leave us alone to succeed or fail on our own.” Government needs to stay out of people’s lives. Sloganism, frequently prompted by government dabbling in Social Engineering is utterly divisive. An all too frequent focus on that sloganism is race.

The instant question is “Can we be truly free when so many decisions are made on a basis of race?” Can the farming of Black people by the Democratic party be an effective strategy going forward? I think not. Those leaders who perpetuate racial conflict, are the real villains that have the blood of the Buffalo victims on their hands. They must be stopped.

God Bless America and especially Ukraine at this time of genocide.