Lenin is Educating Your Children 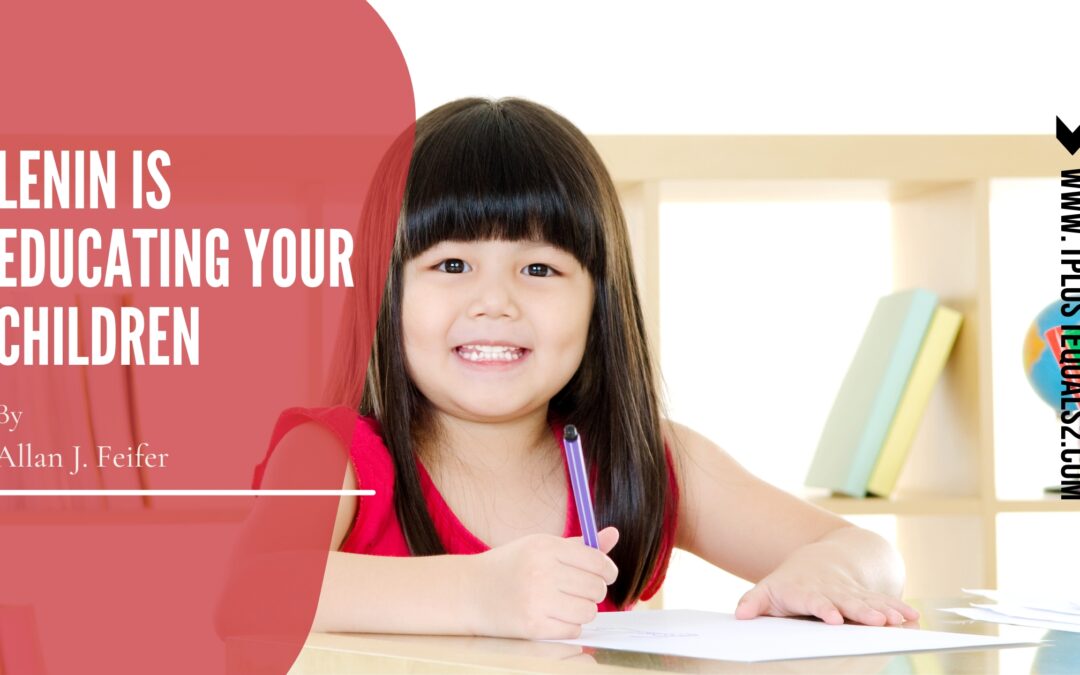 Let’s commence with a simple premise: An uneducated or undereducated American population is vulnerable on multiple levels. Our standard of living, history of peaceful coexistence, prosperity, propensity to be manipulated and more are problematic.

America’s Public Education System is in shambles. Covid was just the final nail in the coffin. Our public education system has been dysfunctional for a long time. My Father graduated from an NYC Public School somewhere around 1945. (I like to brag that he had one of two perfect scores in the New York State Regent’s Exam that year.) The NYC School System was known for graduating some of the finest students in America.

But, no longer. Excuses are irrelevant. My Father’s school was filled with Italians, Jews, and others, mostly poor, first-generation immigrants living in the Bronx. Parents expected a traditional and quality education, and they got it. Today, society demands Equity instead.

About 46 million students attend traditional Public Schools and another 3.5 million attend Public Charter Schools. Also, about 4 million are homeschooled while another 5 million are in private schools. The number of children abandoning traditional public schools is on the rise.  Government leaders don’t want to talk about either the megatrends affecting enrollment or when offered a choice, how many parents vote with their feet. Traditional education leaders are frantic to change the subject when challenged and offer bogus excuses for their failure to deliver a good academic education. It sure as heck is not for lack of money. The United States spends ¾ of a Trillion dollars a year on public education while the number of students they educate declines. Also, keep in mind that for those roughly 12 million children not in public schools, money from the state is frequently absent or meager at best. Essentially, government bureaucrats have a lock on school funds and they aren’t sharing.

Those that make up the traditional public education system, the politicians, unions, teachers, and all those others who profit through the cash that flows through education like a river, don’t tell the truth. It’s all about the Benjamins, Baby! A huge fraction of the nation’s wealth goes into supporting an education machine that largely exists for its own purposes, sadly, not for that of the student.

I encourage you to read the following slowly:

“Destroy the family, you destroy the country. The way to crush the bourgeoisie is to grind them between the millstones of taxation and inflation”. And “Give me four years to teach the children and the seed I have sown will never be uprooted.” —Vladimir Ilyich Lenin

God save us…it has happened. Try as I might, I can think of no solution to save public education as exists today. There are outposts of excellence here and there, but even those few bright lights are dimming under the continued onslaught of Political Correctness, demands for Equity, and greed. Nonstop claims of White Privilege, Virtue Signaling, Critical Race Theory, and myriad other contrived code words and phrases are all designed to separate us from our history, families, and norms.

Why did we not stop this sooner?  The damage lies before us in children who believe our country was founded on racism and theft. They are taught to believe that the only way forward is to burn it all down and start over. The Destroyers positively pant at the idea of laying us low, brought to our knees, as the only path back to their vision of social redemption.  You can’t reason with those Destroyers that have no eyes, no ears, no soul, and no ability to apply logic, reason, or understand history itself.

An organized cabal of supposed learned men and women is openly attempting to destroy you, your children, and our society, all the while claiming the moral high ground for themselves. A pox on anyone today who sits back and says nothing, as lives and our country is ruined on the altar of Progressiveness.

The answer you may be waiting for is that we should pull the rug out from those Destroyers and start over again. But there is nothing worth saving, little to nothing on which to build upon. The day that Arithmetic was thrown away in favor of New Math, the handwriting was on the wall as Johnny was suddenly unable to add up a simple set of numbers.

Yes, tear it all down.  But different than the Destroyers would. Let’s start over and let’s redefine education from the ground up. First, take the politics out of education. Kindergarten exists to prepare kids for elementary school. Elementary School should be all about reading, writing, arithmetic, and citizenship. High Schools should set children on different tracks like college prep, education for the trades, or some other purposeful pathway.

There is a single action that would fundamentally change public education overnight. It is simple, easy to understand, and is the fairest distribution of taxes we all pay. All you have to shift the power is to make educators compete for the money. Attach money to the child and like some miracle, you shift the power from the government to the parents, where it should have been in the first place.  Anyone who fights this simple system should be examined for their motives. Look up the Doctrine of Clean Hands and you’ll know where I am going with this! Those that stole the promise of an educated mind from a child should have no say over what a parent believes is best for their child. Ask Governor Youngkin how that message resonates with parents.

Where do all those hundreds of billions of dollars in taxes go? Before I answer that, we should recall what Willie Sutton famously said in 1925 when asked why he robbed banks: “because that’s where the money is.” I feel sure those working in education would take umbrage with my comparing them to bank robbers. Yet, it is a fact that American educators are not nearly as underpaid as they loudly claim.  Teachers and administrators make more money, have more time off, and have a slew of benefits including summers off and much more. Yet they generally work fewer hours and enjoy better benefits than most Americans. The average American makes about $52,000 a year for full-time work. The average teacher is at about $60,000.  These are just the facts, not the hype. I loved my 4th-grade teacher, Ms. Fowler. She was priceless. However, money alone does not make a good teacher or a good education system. If you had to grade our education system as a whole, what grade would you give it?

It is way past time to reimagine education in America. Our children are not getting their money’s worth. It’s up to parents to make those tough calls to decide what’s best for their children. Your child’s future depends on your choices today.  Parents ultimately decide whether to turn over their children to the system or to stay involved and remain in control. That choice will boost or shrink your child’s success all the rest of their days.