Laboratory One and “Former Persons” 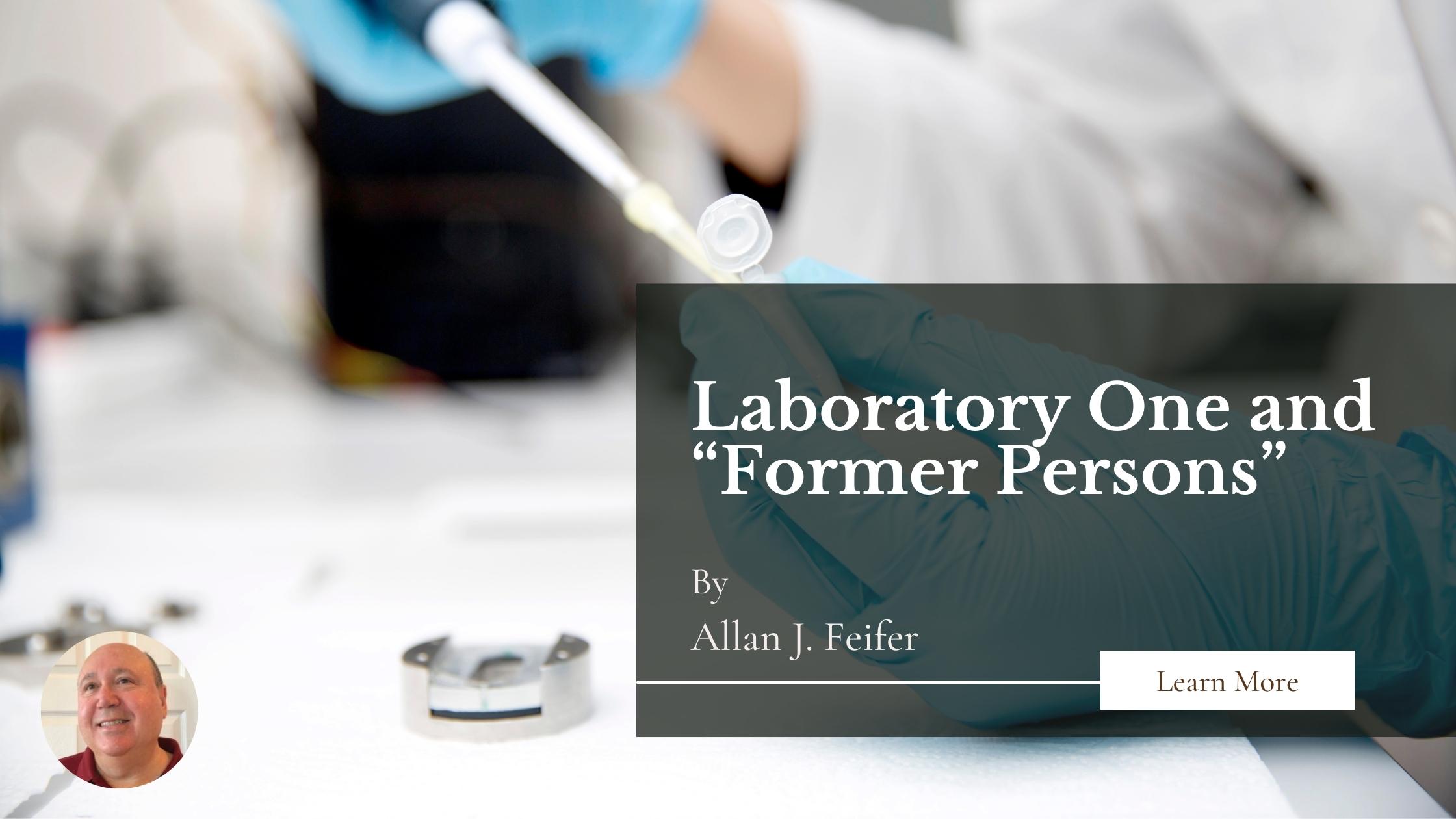 Two things one must understand about evil. First, while everywhere, evil is frequently hidden from our view. Second, evil is seductive and attracts those to it that may live otherwise ordinary lives. It may help us to better understand evil as some kind of cult. Those that belong to the cult of evil are part of something semi-exclusive that not everyone can join. Evildoers frequently do things, which to them infer a sense of superiority and exclusivity for those on the inside.

Today I’ll share with you the chilling but true story of political poisonings and bioweapons hotly pursued by Russia, China, North Korea, Iran, and a couple more would-be contenders who feel little restraint in pursuing a path of pure evil to this day.

While on vacation, I read the book The Dancer and the Devil which is subtitled “Stalin, Pavlova and the road to the great Pandemic” written by John O’Neil and Sarah Wynn. Have you ever considered that some of the seemingly most complex issues are a product of people looking for that complexity when the answers are simple? So, it is with this story as well. We’ll begin today with the end of the story and work our way backward.

This story’s title begins with the term “Laboratory One.” That is what Joseph Stalin called his poisoning and bioweapons labs, commencing back in the 1920s and continuing to this day. Stalin used poisons that created both natural-looking deaths when he desired stealth, and horrible deaths when he wanted to make a public point. Stalin killed his enemies both internally and externally. He was particularly cruel to ex-pats who had the temerity to criticize him. He frequently “recalled” emigres that had fled Russia in the early days, commanding them to return. His purpose in recalling these people was to be able to kill those that returned quietly, beyond prying eyes. Stalin was ruthless, frequently killing entire families to underscore his authority.

Among those emigres that Stalin truly hated was Anna Pavlova, generally considered to be the most famous of all the diva prima ballerinas.  She died in Europe of poisoning in 1931 after refusing to return to Mother Russia.  These sudden unexplained deaths became so common that the phrase “Previous Persons” was coined, referring not only to the deaths of some people but to the way the Soviet Union would rewrite history by completely removing someone from all records, photos, newspapers, and all other ways that would allow someone to live on in memory, sadly, killing entire families also became too common.

Up until 1956, Communist China and Communist Russia were joined at the hip. This meant there were few secrets between the two countries that saw themselves divvying up the world. Soon, new Laboratory Ones popped up in China. China already had a historic association with targeted poisonings. With Stalin’s help, China soon became a contributing member of the cult of death.

But something happened that changed everything, all at once. The introduction of the Atomic Bomb was a watershed moment for Stalin. It became apparent to Stalin in the 50s that the age of the Atomic Bomb could prevent the Soviets and their close associates, the Chinese, from destroying the west through conventional means as had been his long-term intention. Stalin’s Laboratory One would still go on to kill millions of his own people and others over three decades, but now, it had a new, even more, urgent mission; how to kill your enemies not with rockets, but with microbes or other toxins. Even after the split between the Soviet Union and China in 1956, the writing was on the wall and China was still taking notes. To underscore this point, it is widely known that some Russian ICBM’s payloads were not nuclear, but biological, to be used after a Russian first strike.

The 1972 UN Convention on the Prohibition of the Development, Production and Stockpiling of Bacteriological (Biological) and Toxin Weapons and their Destruction” was the follow-on to the 1925 Geneva Convention. All major nations, including Russia and China, signed on and then promptly forgot about by the latter two. Importantly, the West, collectively and practically have given a false reliance to their people that Russia and China mean what they say, despite evidence to the contrary. The naivete of the West is hard to phantom. Whether we are talking about climate change or nerve agents that Putin has deployed against his own people and others, Russia continues to do what is in its ruthless self- interest. Programs like Operation Bonfire and Operation Flute run today as we speak, all known to US and foreign intelligence agencies and all conveniently swept under the rug so our political leaders don’t have to deal with these inconvenient truths that might require a consequential response.

Given that Russia continues to look for ways to annihilate us while keeping its public skirts clean with at least the semblance of plausible deniability, what’s China doing? The end of the Chinese Spring was clearly demonstrated at Tiananmen Square in 1989. Tank Man stood in front of a main battle tank and seemed to fulfill our wishes to see individual freedom defeat the Monsters. That’s the lingering memory that so many of us had. How many of us knew that 10,000 died in that same event? More uncounted dead followed as China reapplied its Iron Glove. That was the starting point for an ascendant and once again brutal China after a short period of economic and social freedom.

Xi came to power in 2012. Putin assumed power in 1999. Both held the belief that the decadence of the West’s influence on their two countries would inevitably lead to a liberalized and indulgent population unwilling to declare its unwavering allegiance to Putin and Xi. Such a condition would be untenable for these two tyrants.

While each pursued different objectives, their aims are aligned. Russia became focused on its territorial ambitions and the defeat of NATO, while China created its economic warfare plan, which is called the Belt and Road Initiative.  China’s plan is more diabolical in its cerebral and patient approach to the world or at least hemispheric domination. While Putin’s goals are more clearly focused on the utter destruction of its enemies clearly and completely. Putin and Xi each use their vast resources to create ever more deadly targeted and indiscriminate biologicals and toxins designed to kill tens of millions.

It was not Laboratory One that released COVID-19 on an unsuspecting world but the Biolabs of Wuhan. One does not have to look far to find a detailed listing of all the undeclared, but suspected bioweapons labs in China. Not coincidentally, there is another Chinese PLA lab also located in Wuhan. Until the release of COVID, various Chinese military names and ranks were prominently displayed on the roster at the Wuhan Virology lab. It is a fact, not in dispute, that all the original Covid-19 Doctors and their research have joined the disappeared, never to be heard from again. This is what the guilty do.

It now appears to be the West’s policy to not confront China on the origins of COVID. As a matter of policy, what would our nation, and other Western nations do if it could be proven that a weaponized (Change of Function) COVID was either deliberately or accidentally released upon the world? There is ample evidence that China was either buying up or sharply reducing exports of everything you would need to fight and protect against this killer virus. China has stubbornly fought back against any assertion that China is in any way responsible for COVID-19 well before the Pandemic was well known. There are no if’s, and’s, or buts about it. If you needed any more proof, the introduction of China’s most feared Special Forces unit, the Fifteenth Airbourne Brigade moved in to take charge late in 2019 to seal off access to the lab and provide overall security and political cleanup. Curiously, Chinese PLA soldiers in Wuhan were vaccinated against Covid months before Trump’s miracle in our country. More proof that this was a military weapon by design.

Yusen Zhou was a government bioweapons scientist who filed for a patent for a vaccine against COVID- 19 before the outbreak even happened. We should ask him why he developed the vaccine, but we can’t, he’s dead and all his notes, even his life’s story are now unknown. He is one of the thousands the Chinese have declared to be new Former Persons.

I better stop right here or I as well might become one of the disappeared that happen all too frequently when you displease Xi or Vladimir Putin. There is evil in this world. And, you don’t have to look too far to find it. History has a strange way of repeating itself. Hopefully, we stay engaged and learn we have two twin Devils to fight. The first step is by believing that evil exists and that we are among those they covet. We live our charmed and indolent life all too precariously. We must be more on guard if we are to survive and prosper.

Author, Businessman, Thinker. Read more about Allan, his background and his ideas to create a better tomorrow at www.1plus1equals2.com