It Could Be True 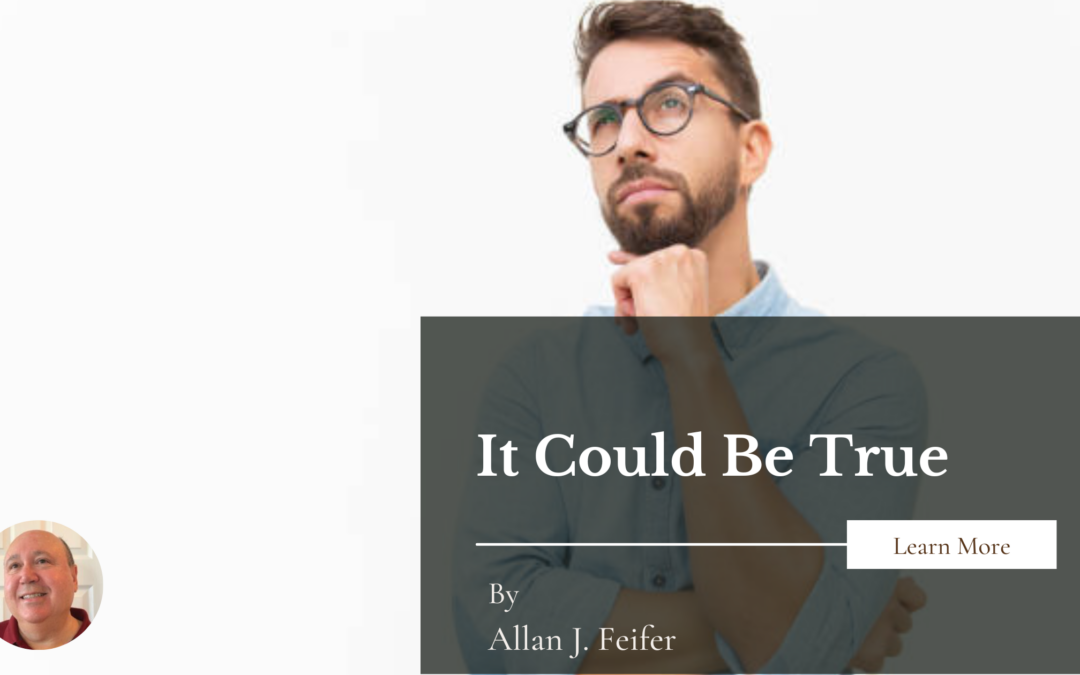 What do all of the following have in common?

I could go on endlessly as all or most of the above are valid for too many greedy people.  Years ago, I had an associate who loved to parry with me verbally, and we enjoyed the interplay.  Sadly, although very smart, this associate sometimes lacked a solid connection to reality.  She often said, “It could be true,” when she thought I was describing that grey area between truth and fact.

Now, it seems, our little private game has become the way of the world, with one significant difference.  In today’s game, one dares not call out certain classes of people on their logic, sense, truth, or perception of reality for fear of being called any of several powerful, nasty, and socially irredeemable names.  Indeed, the power of the law backs up this craziness more every day as our society begins to buy into the belief in “Thought Crime.”  Let’s talk more about this.  The idea that “This Could be True” speaks to the ever-growing acceptance of “Alternative Thinking,” i.e., thinking without reference to logic, history, or consequence but as equal to rational thought.

As described in our last hyperlink, Alternative Thinking includes: “managing emotions, feelings, and thoughts from another position, moving away from pessimism and towards optimism.  It’s also helpful in promoting personal well-being.” It is very much about elevating an individual’s self-worth above actual competence.

In essence, Alternative Thinking is about how you come to your choices through the lens of emotion vs. a requirement to use logic as a primary thought process.  Logic, like speech itself, is next up on the hit list of standards, with the excuse it may hurt someone’s feelings.  And that’s all it takes these days.

Here’s how to teach Math from a Social Justice point of view.  “Proportional Reasoning problems related to Social Justice.” This is an actual Common Core curriculum lesson taught by one teacher who freely admits that indoctrination through lesson plans is not only perfectly acceptable but should not require any defense.  A quick internet search will explain how Social Justice warriors believe merging their radical worldview with Social Justice is the only way to attain a more “perfect” society.

In the middle of this thought is the even scarier understanding that the genesis and genius of this way of thinking are that the participants don’t even realize they’ve been robbed of an education and their free will, all at the same time.  Whether through a lack of educational achievement or a deliberate education that skips having to make good honest sense of the truth, millions of adults are functionally illiterate in history, science, math, and mental cognition.  Is it any wonder that our country appears to have no way (or desire) to stop our current literacy slide in what amounts to an Extinction Level Event of what used to be a world-leading America?

On the other hand, our enemies continue to aid us in our destruction by shipping Fentanyl to us by the ton or encouraging various destructive behaviors (think TikTok) that they hope to carry over to our economy’s workers, military, elected government officials, and especially to our young.  Any detached thinker charged with analyzing trends would see where dozens of learned behaviors and actions must logically conclude, i.e., our endpoint.  Yet that seems invisible to too many.  This is where the political divide that exists really comes into play.  Those who understand logic, truth, and reason vs. those who believe all of these quaint ideas are fungible, situational, and somehow acceptable.  This is where our country stands today.

What to do about this tragedy of these popular belief systems?

First, have you ever heard of the term “Performative Activism“?  It is an easy target to hit because of the many well-known public figures, media personalities, and activists who hammer the Right relentlessly, proselytizing their false beliefs.  Performative Activism is a philosophy of thought designed to increase one’s social capital rather than one’s devotion to an actual cause.  Another explanation is that performance activists are frauds, charlatans, and con artists.  They exist today by the millions, especially in high-visibility avocations where they can influence debates and conversations and hold themselves as experts and thought leaders.  They are indeed nothing more than the frauds they are.

How do you distinguish between a real and a fake activist?  Look for someone who achieved their street cred, not from empty statements but through deeds that take effort and cost them something tangible and valuable.

Authentic individuals who walk the talk are easy to discern.  The rest are easy to find by studying their bios and listening carefully to their usual messages of hate and division.  Such individuals tend to make categorical statements like Biden’s Ultra MAGA Nation divisiveness claptrap and other emotional utterances, which amount to nothing more than choreographed outrage playing well to their simple-minded followers.  But unmask a few, and maybe Conservatives can start to change minds.  And that’s what we need to do, change minds.

In the margins, we see Hispanics questioning Democratic dogma.  We see suburban women, especially those with school-age children, fearful for their child’s future.  People everywhere are questioning the governmental advice they received on Covid, which was less about protecting us against the virus and much more about control, which the government does not want to give up, even to this day.

Call out the government on dozens of issues that have never made sense before and don’t know.  We must make their ability to control false narratives even more difficult.  We allowed them to gain a degree of control that the Founders would never have believed possible.  For example, illegal or hastily cutinized aliens are supposed to replace your importance in future elections.  Don’t let Democratic leadership win this battle!  The war is going on right now, and far too many of us don’t know what’s happening in our country.  That’s the plan; that’s the game.

Ultimately, do we want to live in a world of “it could be true,” or are you like me, someone who wants to know the truth and live a life based on that truth, living in the light?  We must each make that decision.

What will you decide?