If Something Requires Subsidization, It’s Probably a Bad Idea 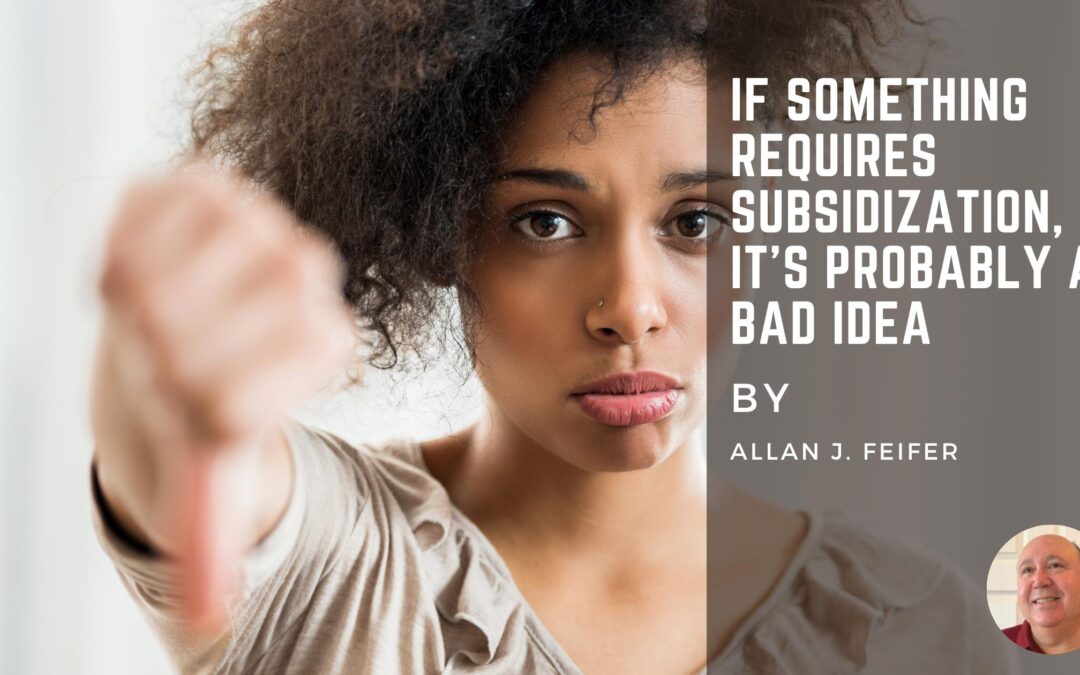 Our government and those of other countries distort financial markets and market forces through intentional manipulation, regulations, and policy decisions. Market Interventions frequently serve seemingly noble purposes, all too frequently with disastrous or costly results. Let’s start with a general statement to get everyone on the same page.

From Investopedia: To free-market purists, market distortion is any situation in which prices are determined by anything except the unfettered forces of supply and demand. By that definition, truly free markets are scarce. Market distortion also means any interference that significantly affects prices and, in some cases, risk-taking and asset allocation. Governments are the source of most market distortions, including regulation, subsidies, taxes, and tariffs.

Adam Smith, the great Scottish Economist, and Philosopher who created the Invisible Hand theory that gave us our most important theories of self-interest would be positively aghast at what we’ve done to his economic theories. Why? Because no system can be ultimately successful if we remove the ability to fail or which requires the rationing of goods and services for the sake of individual needs.

Pure capitalism is both incredibly efficient and brutally uncompassionate. It is because of the latter that the government swoops in to save people, mostly the poor from the worst ravages of capitalism out of a sense of altruism, perceived fairness, and too often for political reasons. In modern times, Roosevelt’s New Deal is the perfect starting point to explain how we wound up where we are today. To Democrats, the New Deal seems to make their case for government intrusion into everyday life. Glorious and frequently untrue stories of how people were saved from starvation, were lifted out of poverty, and that the New Deal led us out of the excesses that flowed from the Stock Market crash of 1929. Instead of being the success believed today by almost all, The New Deal lengthened the hardship and slowed our exit from the Depression. Only in the run-up to the Second World War began the process of revitalizing our country and the return to more aggressive Capitalism. Capitalism and its selfish avarice encouraged people to take the risks that our country needed to fight and win a war.

President Johnson was the next Democrat to give up on Capitalism in an attempt to improve the lot of all Americans. Johnson’s Great Society Programs ostensibly were about raising our poor out of poverty and into the mainstream. The Great Society framework was “an ambitious series of policy initiatives, legislation, and programs to end poverty, reduce crime, abolish inequality, and improve the environment.” Despite the expenditure of trillions of dollars, many aspects of the program were a flop. Roosevelt’s, and then Johnson’s good intentions destroyed black farmers, black families, and millions of others through the disincentive to work, invest and maintain the nuclear family. Subsidies change behavior.

Now, Democrats have latched on to a new priority…Climate Change. In past installments, we’ve discussed the near-religious doctrine of Climate Change. But, unlike religion, there is no diversity of thought any longer. It is with the force of law that no one shall stand in the way of our Climate Warriors. Ballyhooed from on high is that Climate Change is not only going to save the Earth but, in the process, create economic opportunities the world has never seen before.

Is it slowly dawning on you that there is nothing about our current system that won’t be remade in a headlong rush to ostensibly save the planet? That is, saving the planet is the stated reason. And, the government, with its seemingly unlimited purse and a legion of true believers, many of the most liberal, nee socialists, stand in the bleachers cheering on not just Climate Change, but the necessary Social Change that is part and parcel of that same thinking.

But the problem is that whoever is running this train has no idea what our destination will be. What is going on at present is the Left’s metaphorical Hail Mary!

The degree of subsidization required to accomplish this dream is breathtaking. There is not a single element of their ideas for fixing Climate Change or Social Changes that doesn’t require the economic subsidization of every element:

I could go on. Every facet of what the government and its high priests and priestesses desire for our future requires spending on a massive scale, thus redirecting your money for their purposes. If you resist any of their demands, you become an enemy of the State.
Nothing they do makes economic sense. As an illustration, if all they were concerned with was the elimination of fossil fuels, they would go nuclear so they could make unlimited amounts of carbon-free electricity, crack water into Hydrogen and Oxygen and maintain the traditional economic system that has served us so well. Could it be that their intention was never to make sensible decisions; just to reinvent, i.e., remake us socially? In whose image I ask?
God Bless America!