I Am the Science 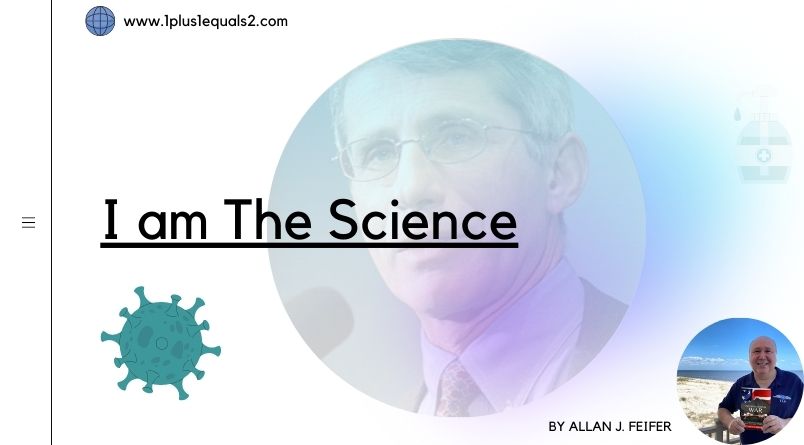 In November of last year, Dr. Fauci made the guaranteed lighting rod statement “I am the Science.” The complete statement reads even worse:

“So if you are trying to get at me as a public health official and a scientist, you are really attacking not only Dr. Anthony Fauci – you are attacking science,”

Let’s step back a bit. As I am writing this, it’s 6:30 in the morning and still dark outside. Just over a week ago, I got my “booster” shot and suffered for almost a week with every known malady you can get from taking these damn shots. I won’t call them vaccines because these are something else; genetically modified mRNA.

How it works: mRNA or messenger RNA may be labeled as the newest vaccine in town, which is a stretch as far as I am concerned, but as we have previously reported, the technology surrounding it is not entirely unknown, as mRNA research has been in the works since the 90s. This type of vaccine injects instructions, via a piece of genetic code, that tells your body how to make a certain protein essential to blocking the virus. “The mRNA vaccines instruct our cells to recognize COVID-19 and produce a harmless “spike” protein,”. These proteins train your immune system to recognize the virus and make antibodies to attack that virus if it arrives in your body. The instructions quickly vanish, but your immune system stays fortified. https://www.menshealth.com/health/a35589366/mrna-vs-traditional-vaccine/

It is important to keep in mind that this technology has been under study for decades but this is the first use of the technology according to John Hopkins. https://publichealth.jhu.edu/2021/the-long-history-of-mrna-vaccines The novelty of “first use” is/was my first warning flag that we simply don’t know nearly enough about the efficacy and long-term effects of this shot.

So why did I take it last year and again in 2022? Logic. I’m 65 years old and have multiple comorbidities. If I was 20 years younger, I would likely not have taken the shot. Assume for a second that Covid is the flu, but something more like swine flu, only worse. Here is a list of the worst flu outbreaks in the United States in the last 100 or so years and the resultant number of deaths:

This would seem to pale in comparison to the often stated figure of over 800,000 dead in the U.S. from Covid. But, is that a true number? As each day goes by, it seems more and more likely that the numbers quoted are not accurate. Specifically, the numbers are now generally understood to mean, dying with Covid vs. dying of Covid. Whatever politics you subscribe to will influence how you digest this statement. Whatever the real number is, whether it is the CDC numbers or some fraction thereof, a lot of people died and will continue to die of Covid. Something else to understand. We are a nation of 340 million. The population in 1918 was 103 million. In 1957 our population was 175 million. Covid is not the worst flu the United States has ever seen per capita. It is, however, unquestionably the most reported.

What has not been widely discussed so far is how Dr. Fauci’s strategy of fighting the disease has played out. Fauci was and is the single most important individual that decided how we were going to fight the disease. It was and still is the policy of this country to eradicate the disease by “Stopping the spread” as President Biden frequently states. This was true under President Trump as well.

I predict that when this is all over and Covid-19 has become endemic (which it likely is today) that the strategy undertaken by U.S. officials will not only come under fire but will be proven to have been an abject failure that destroyed lives and treasure and might ultimately lead to a realignment of world power. It is beyond the scope of today’s missive to discuss China’s role in all of this, but we must take note of the forces unleashed by this virus and the world changes that have resulted, and the virus effects that will likely continue into 2024 and beyond.

What was the central failing of our strategy? A belief that we could stop what amounted to the common cold on steroids. With Omicron, the latest variant of the base virus we are seeing even greater spread than before. While less deadly, Omicron lays bare the rubric that by taking the Covid Vaccine we can stop Covid as widely promised by Fauci. When it became obvious that Covid shots could not stop the spread, the message changed to: “Their effectiveness is measured by how well they protect people against moderate to severe COVID-19 disease—not how well they prevent infection or spread of the COVID-19 virus itself.” https://time.com/5937868/do-vaccines-stop-covid-19-spread/ Interestingly, I scoured the internet to find an earlier statement by the government that categorically states that the vaccine will protect you from infection. Very hard to do. The internet is being scrubbed! Here’s one statement I found: “Some recent studies have shown similar peak viral loads in vaccinated people compared to unvaccinated people who contract COVID. This has raised concerns for the efficacy of vaccines for preventing transmission.” https://www.weforum.org/agenda/2021/11/covid-19-vaccination-spread/ Unstated, scientific conclusions are steadily moving to what’s next since the spread of the disease seems unstoppable.

What should we do? Science lays an almost exclusive claim to logic. Specifically, Fauci’s statements continue to involve and have become more and more political. I wish to state to our readers that there will be no endpoint with Covid. Consider Covid a warning on two levels:

The United States spends hundreds of millions of dollars each year funding numerous labs, universities, and other scientific endeavors against just what has happened here. No one I have heard has said “what the hell happened?” Why were we so unprepared on so many levels for a world pandemic? Where was the system of tripwires that would inform us to pull out the three-ring binder and start executing a well-thought-out and rehearsed strategy for dealing with this? Not only was this foreseeable, but it was also expected. Not only were we late to the party, our strategy of mitigation utterly failed. In this failure, people died who should not have and our economy suffered grievous damage that will be felt for a generation and beyond. The lack of a cohesive plan led to our children (especially minorities) losing two years of education and the likelihood of a lifetime of consequences. How did we have failed so spectacularly?

Remember it was Beauty who killed the Beast in the original King Kong? Well, it’s now Science that killed the country. How could we have approached this disease differently is the obvious question? I am not a scientist, I consider myself to be more of a logician. The first step would be to identify the risk. Having studied cases of flu-like this for a generation, we should have been able to understand which population groups were at risk early with Covid. Instead, we chose a one size fits all approach and did not protect our elderly were more than 75% of deaths occurred. When the records have been revised, we may find that figure rise to 80% to 85% of actual deaths. Quarantine procedures have been understood for more than a hundred years. How did we fail our elderly so completely? By putting Covid positive individuals back in nursing homes as Governor Cuomo did? By splitting resources so that there was not enough PPE in places that needed it the most?

In my view, the worst atrocity to date was the abdication of leadership by those ultimately responsible. Blame President Trump or Biden, that you may, science has demonstrated a poor track record of getting results without the leadership of the civilian authority. Fauci has become a scapegoat for what has gone wrong and he has been all too willing to live in the limelight and claim sovereignty in his area. Many smart people in this country identified problems with our strategy early. Their voices were frequently drowned out by Fauci’s acolytes and their ability to create alternative strategies which were severely constrained by the fact that Fauci did not fund anything except ideas and people that he supported. There was and is a lack of diversity of opinion on how best to react to this Covid and future threats.

Imagine for a moment that our tripwires worked and we knew what was coming. What should have been the first steps to buy us time while we marshaled our resources? We would have pulled out our proverbial three-ring binder and executed a standardized plan.

If this seems to be an oversimplification; it likely is. But too many people believe the Covid response was politicized because it was. Diseases are not democratic. They strike at targets of opportunity with no regard to politics. Also, as our knowledge evolved, our response lagged our understanding. The United States demonstrated its ability to react by producing more than 200,000 ventilators https://www.reuters.com/article/us-health-coronavirus-ventilators-insigh-idUSKBN28C1N6 that went largely unused after we found out we were killing the majority of people put on them by over-pressuring their lungs. https://www.webmd.com/lung/news/20200415/ventilators-helping-or-harming-covid-19-patients#1 Today, few patients are being put on ventilators as a consequence of primary Covid infection. First, we were told that masks were useless, then they were essential. Next, we were told any mask would do and today the President has stated that free N-95 masks will be shipped to everyone https://www.msn.com/en-us/video/causes/president-biden-promises-free-n95-masks-and-more-at-home-covid-tests/vi-AASKOoe and that cloth masks don’t really work. The word “cosmetic” comes to mind.

Cosmetic underlies too much of our Covid response. How many hundreds of millions were spent on plexiglass shields that do nothing? How about telling everyone to disinfect surfaces lest you touch Covid on a countertop and get infected? Never happened. “Justice Sotomayor Falsely Claims 100,000 Children in ‘Serious Condition’ from Covid. https://news.yahoo.com/sotomayor-falsely-claims-100-000-185529971.html Why do people say things like that? She knew better. Kids were never seriously at risk, yet we trashed them and their futures for politics. People are needlessly dying on the altar of partisanship.

Here is the one immutable truth of Covid. It needs a new human host to jump to or it ends. Period. We would have been much better served to try to figure out how to stop that jump, which was doable when the number infected could be counted in the dozens, hundreds, or even low thousands. This was a test of leadership that we failed spectacularly. We must learn from our mistakes or the next genetically engineered virus-like Covid-19 was could be much more Ebola-like and virulent costing lives in our country in the millions and the future of our country as a whole could come into question. This was a true wake-up call. We learn from our mistakes or we retrace the path that Fauci plowed. “I am the Science” scares me more than the virus itself. I hope it does you.

Also Read: Reality Is Not Democratic

Our final takeaway today is that the last line of defense for myself and hopefully you is that while the government informs us, it is up to you and me to evaluate that information available and then make our own judgments, decisions, and actions. No one can supplant your judgment based on your individual circumstances and analysis. To act in any other manner is to turn your life over to the government with one mandate after another governing your life. And, that ladies and gentlemen are something I will never do.

Allan J. Feifer: is a outspoken patriot lifelong conservative author & Inspirational speaker. In light of recent events, Allan felt compelled to write his new book after he and others felt helpless watching the destruction of what was once the undisputed greatest nation on earth. Stay connected with Allan blogs for more awareness.