Does America Have an Endpoint? 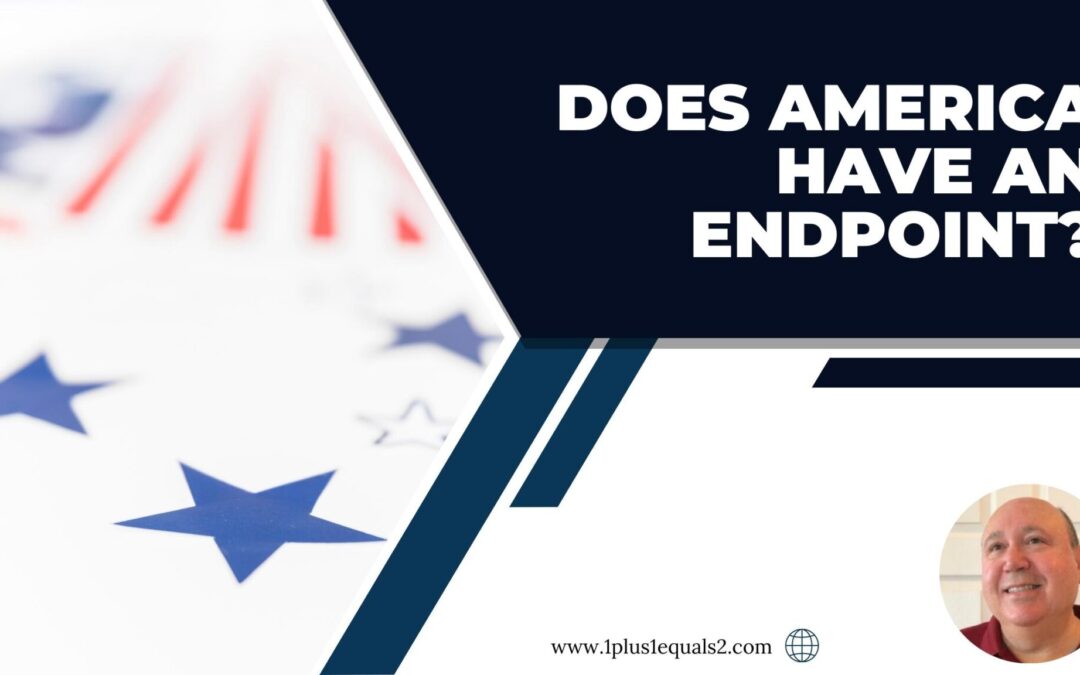 It’s been a great ride. When you just focus on the accomplishments of our nation, the broadly shared wealth, opportunity, and well-being created, you just won’t find another story to rival America’s. Today, I won’t utter one word of derision or explain away any faults we have had along the way. We’ve done that in virtually every previous installment as balance; anyway, our mistakes are hammered into us by our detractors.

Today, I will articulate what the world has to lose without the America that was vs. our nation in transition. It is important to understand that you and I have a stake in whatever direction we, as a nation, ultimately take. Many realize we have reached a fork in the road, and what lies beyond is unexplored territory.

America’s Accomplishments
What has America given the rest of the world that it would not likely have save for our existence? If you are a reasonable individual, and honestly answered the question truthfully, you would have to say “a lot!” Let’s try and list just the top five accomplishments from a possible list of hundreds:

1. The creation of vast wealth has benefited Individuals in the Arts, Education, Sciences, Philosophy, Medicine, and so many other fields of opportunity. America’s wealth has been spread across the land better and more thoroughly than any Kingdom, Socialist ideal, Dictatorship, or another form of social construct.
2. The largest middle class in the world was created by American Consumerism. The vast resources held by these individuals have created enviable social stability.
3. A world of peace has often been enforced by the US. Without our military, would much of the world be speaking German? Our Military has made the difference between peace and war, freedom and servitude, a decent life or one of poverty, and we have attempted to defeat evil, wherever it surfaced.
4. Our nation provides the greatest share of charity in the world. All the rest of the world combined does not match the generosity of our people and our government. We alleviate worldwide suffering to a degree unmatched in history.
5. We uphold Moral Strength. America’s belief in principles as defined by the Founding Fathers has been a wellspring of hope for the rest of the world. Other countries have modeled their Constitutions on ours. Our associations with like-minded countries have made the whole of us stronger.

America’s Special Sauce
Anyone who doubts America’s unique strengths and foundation must be uneducated. Consider the manifest gifts our Founding Fathers bestowed upon us:

1.The encouragement of nuclear families. Parents put their children ahead of their wants and desires in favor of nurturing the next generation of Americans.
2.We generally profess an abiding faith in God, morals, and ethics, together with a belief in fair play and hard work.
3.Our Constitution comes as close to perfect as the hand of man has ever accomplished.
4.The essential tenet of Capitalism guarantees the work of any person belongs to them alone.
5.That guarantee of freedom from coercion by our government leaves us free to succeed or fail on our own.
6.Nothing is owed to us. Only through our hard work can we be truly free. Not everyone will succeed, but the vast majority can and will if they have the desire and put forth the requisite effort. Freeloading cannot be tolerated.
7.We are required by the tenets of our contract with our Creator to be our authentic best selves as part of this great experiment.

America as the Bedrock Anchor of the World
An understanding of both American and world history repeatedly demonstrates that America, sometimes derisively described as the Policeman of the World, has often been the only force standing between tyranny and freedom. This highlights the necessary role we play in creating stability in the world, even while such democratic outcomes may not be desired by those we try to help. We’ve seen such conundrums throughout our history in such widely disparate places as the Barbary Coast to Afghanistan, from Iraq to Viet Nam and other places and distant locales where Americans still fight Marxists and warlords.

We give up our world responsibilities at our peril. As I have written before, there are linkages that exist throughout the world in which we must engage. Whether we discuss trade, would-be world dictators, disaster relief, or reprehensible conduct by other nations that, by our standards, must not be allowed to disenfranchise their own citizens, we must live up to our ideals to confront evil. We must stay engaged. Freedom has a price. Never forget the atrocities that other nations have engineered against their own citizens as well as in pernicious wars of aggression that see no end, save for our intervention.

Good and Evil can be described as not unlike the poles of a magnet that repel, pull, or attract either the best or the worst of us. Inevitably, no matter what we may wish, evil will find us. It is a moral imperative to meet that challenge.

Is it Inevitable that Our Country Must Fall?
Many believe we are on a downhill slope because our best times seem to be behind us. Historical timelines essentially say our sell-by date is past. Is that right? If we forget who we are as a nation of honor and justice, if we give up on logical thought and rely on specious logic or cracker barrel truisms; then they are correct. As Samuel Clemens once said, “The reports of my death are greatly exaggerated”.

A future as the de facto leader of the world is not cast in stone. That future depends on our actions from this day forward. History is only a guide to the future; it is not the future.

Is There a Fundamental Right to Stand Against a New Tyrannical Government?
So, here’s the big question. What are the only constitutional means of change that citizens have? If we lose our country because too many vote to shred our Constitution and gut the country through the ballot box, would that make the loss of our country’s history and promise fair, right, and final?

This is the big question each of us must answer. Constant pounding on the theme of political violence by some is rhetoric designed to keep thinking people from giving up on ideas and actions outside of the ballot box. Is it political violence if you act solely on your God-given rights to survive, prosper and protect your family and yourself? Is there another way?

From the Declaration of Independence:

“That whenever any Form of Government becomes destructive of these ends, it is the Right of the People to alter or to abolish it, and to institute new Government, laying its foundation on such principles and organizing its powers in such form, as to them shall seem most likely to affect their Safety and Happiness.”

Do we still believe in our first and most foundational document? And, if so, has our current government and those misguided voters become “destructive of these ends?” Only “We the People” have the right to answer that.