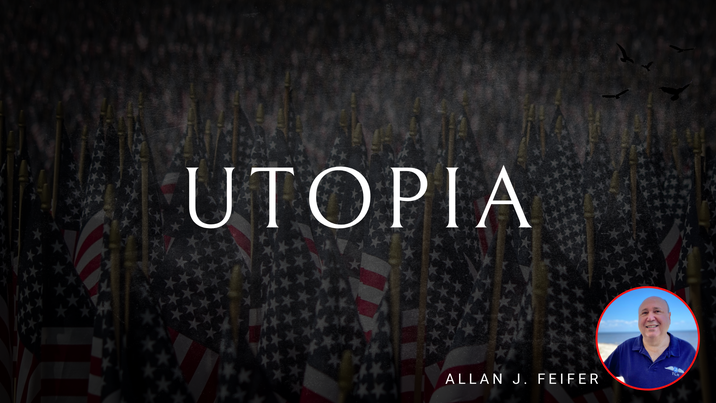 Two kinds of Utopian thought operate in tandem and that will render this country a failing Republic. While both are pernicious, one is at least understandable, while the second is the poison pill that could render us into oblivion. Today we will discuss those two very different versions of Utopia and what to do about it.

We live in a country where millions of people throughout the world would get on a plane, ship, bus, bicycle, rickshaw, or just walk to get here. Why? Because we are a Utopia compared to wherever they came from. The draw is multi-leveled. People come here for:

Three good reasons, three bad reasons. Nathan Smith from open borders states that America is mostly empty space and we could comfortably bring in a billion migrants. https://openborders.info/blog/billion-immigrants-continuing-conversation/  How would we pay for them? The common refrain of the left is that immigrants pay taxes and don’t cost us anything. But, that’s not true.

A FAIR study in 2017 found illegal immigrants are a net consumer of taxpayer benefits worth more than $100 billion a year, not including the cost of enforcing the border. And, that was before the surge started.

While federal benefits are supposed to be off-limits, in practice many are not. More than 125,000 undocumented workers receive subsidized housing, according to the U.S. Department of Housing and Urban Development. Children receive free education and most qualify for English lessons and free school breakfast and lunch.

Illegal immigrants do not qualify for Obamacare but under federal law, hospitals and clinics are required to provide urgent medical care without regard to legal status. Pregnant women are entitled to prenatal and postpartum care under the Women, Infants, and Children program. Infant delivery costs are paid for by Medicaid. A study in the Journal of the American Medical Association found a federal-state immigrant insurance program costs $20 billion a year in emergency treatment, not including the $1.24 billion in infant delivery expenses.

Illegal immigrants are not entitled to food stamps, but families with U.S.-born children are. Once here, have a child and receive a Golden Ticket. According to the Center for Immigration Studies, 31% of such families use the SNAP program, and more than 50% of Central American families in the U.S. use at least one welfare program.

This is especially true of asylum seekers said Art Arthur, a former immigration Judge now with the Center for Immigration Studies, an immigration think tank. Arthur said because there is a three to five-year lag time between apprehension and court appearance.

“You’re going to buy a house, get a job, have kids,” he said. “So their entire life changes, and that means their claim changes. Because of a lack of a bright line for immigration judges, appeals are endless and people don’t leave.”

The front door to America has been open and closed many times, in the last century it was closed for about 40 years. We do this for reasons of national interest. Or, another way of saying this…for nationalistic reasons. Nationalism is demonized by the MSM, Big Business, and Government.

Let me close out this first section with the key to both legal and illegal immigration that is largely overlooked today. Assimilation. How the heck did we get away from requiring assimilation of immigrants before they can become Green Card holders or even worse…citizens.  It is not in America’s interest to allow people into our great land that can’t, won’t, or do not want to assimilate and become English Speaking people and future citizens. People who don’t share our values, including work ethic, love of our country and a desire to be indistinguishable from other Americans in a generation or two simply don’t belong and are an existential threat to the Republic. End of Story.

But, not quite. My great friend Steven S. reminded me of one other thing. For the intelligentsia, one Worlders and nihilists that simply seek our destruction; rampant immigration will do the trick quite nicely. There is a finite amount of resources. They want us to deplete those resources and overwhelm our system. They have succeeded.

Our Own Citizens Believe We Live In Utopia

Just think for a moment the promises that have been made to you in the last 30 years and more recently at a lightspeed pace for even more “Free Stuff.”  Here’s a partial list that too many of us will find just great ideas:

And, this is the tip of the iceberg.

There is no reliable source on the number of County, State, and Federal programs that assist individuals. According to one estimate, there are no less than 6,000 public assistance programs accessible to individuals, both small and large.  Collectively, these programs allow… no encourage a societal shift that has delivered an America we don’t recognize.

We have borrowed from the world and our enemies $22 Trillion since 2000 for a total national debt of $29 Trillion. And, the rate of borrowing is accelerating. Yet, no one seems to mind. That is the Utopian view that 70 percent of Americans must share since we allow it. There are another easy 200 Trillion dollars in promises made to Americans by their government for entitlement programs like:

I’ll make the statement that you probably already know: We don’t have any ability to pay that money back. Total individual wealth in the United States is $100 Trillion. Confiscate, not tax, all that wealth, and in the blink of an eye, it’s gone. We live on debt and it’s destroying our country and our society. It’s inevitable. What follows is a complete realignment of society and the loss of fundamental values like:

Our Own People Think We Live In Utopia

They don’t say it. They don’t consciously think it, but Americans have become detached from cause and effect, cost vs. value, what’s possible and what’s not, our role in the world, trying to be everything to everybody and the scariest thought of all…everything is possible if you just conjure it up in your mind!  We have had bad politicians before. But President Biden and his leftist cabal of politicians and technocrats have gotten this tectonic plate moving and nothing, except perhaps a revolution, is going to stop it. I hate to paint such a Dystopian view of life, but it’s simple math.

1 Plus 1 always Equals 2.  Nothing anyone can say, nothing anyone does and nothing this is promised by the Elites can change the simple math of the equation and what will necessarily follow. All we can do is prepare for whatever comes next. The Utopia believers expect they can keep, expand, and be taken care of forever is a veritable Black Hole destined to suck all matter into its maw. It’s a matter of economics and physics.

There is a better way forward; we simply don’t know what it is. There’s a bit of old folk wisdom that says that if you find yourself stuck down in the bottom of a deep hole, the first step to getting out is to stop digging. Fellow Patriots…that’s job one. Rather than waiting for the music to stop, stop digging and do the many things you can do today to save what’s important to you for the great reset that is inevitable.