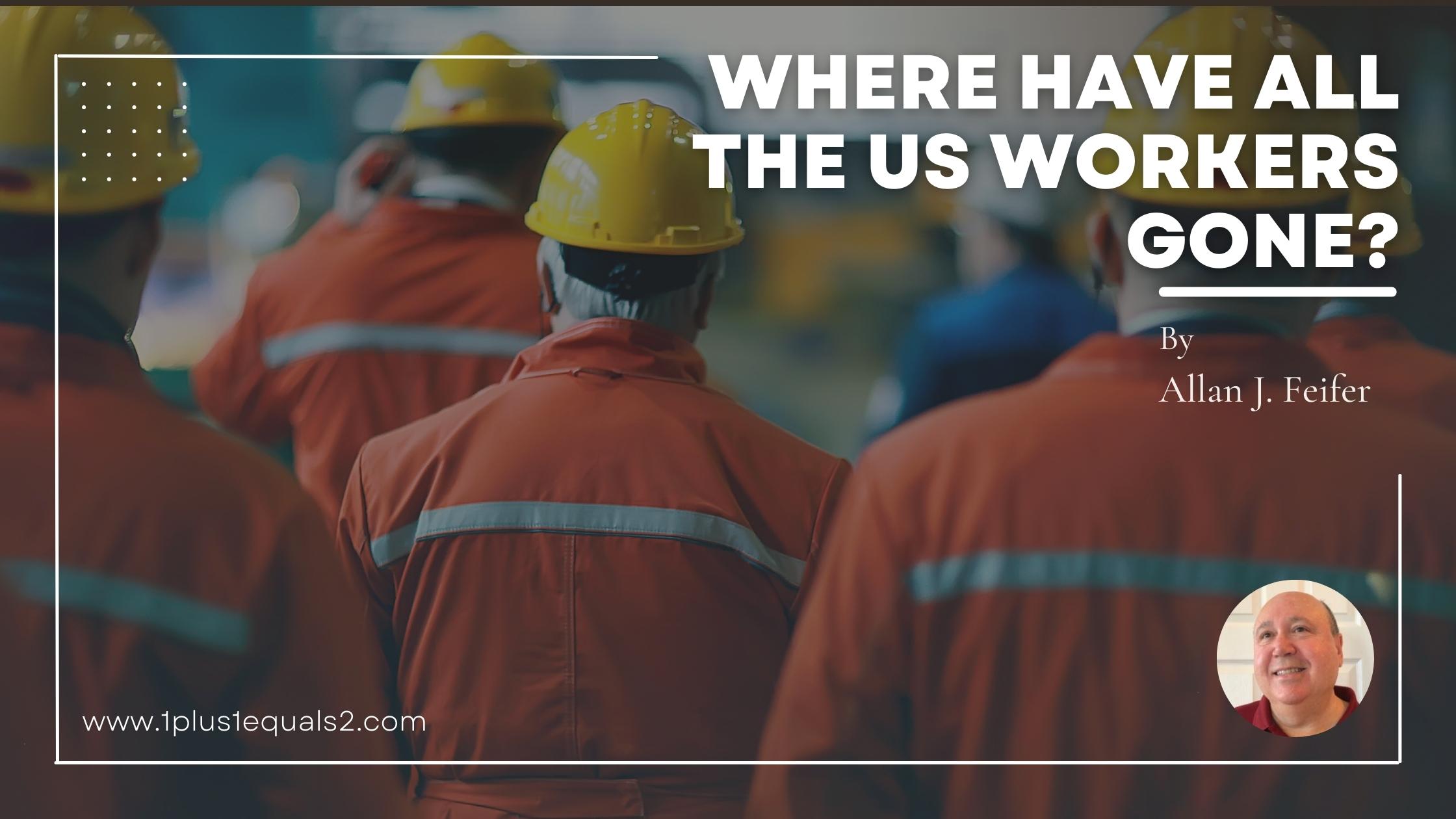 Where Have All the Workers Gone?

Welcome back! Today, I am going to focus on four main concepts that together could explain how our chickens have indeed come home to roost:

1. Through the adoption of Globalism, which is as much about socialism as it is about economics, we have changed who we are at our very core, introducing socialism and the expansion of government into everything.

2. And, oh by the way…we’ve stopped producing things! Who thought that would be a good decision? Baby formula anyone?

3. How government, at all levels, but especially through its overarching hand in manipulating how and what we teach in schools from Pre-K to University has truly sent us down the rabbit hole of Wokeism with children who graduate functionally illiterate. As completely crazy as it seems, the more we spend, the dumber our kids become. Our country spends more than anybody in the world, yet we rank 11th in science and 33 rd in Math. What we teach does not work. And, it is far worse for minorities and the poor. It’s a national tragedy.

4. What has happened to our youth? Ambition, drive, and taking risks has been replaced by having fun with friends, living off Mom and Dad, and retreating into an online world of Live Action Play constructs where more and more of our young people functionally live.

In the past, we’ve discussed Globalism as more or less a standalone issue. Today we are going to pull together disparate concepts, that individually were pushed by this or that political action faction but just like nuclear fission, are now self-sustaining in a manner that no one likely contemplated. This deserves some more understanding before we move on. There is no doubt in my mind that America has enemies that manipulate individual groups for devious ends. The success of those actions runs the gamut from duds to profound successes. The American Communist Party has advocated for decades for…Communism. This has resulted in complete failure. Same for groups like the violent “The Weathermen” or “Students for a Democratic Society, a.k.a. SDS; all flashes in the pan that made news, injured or killed people but failed in their primary thrust of significantly changing our county. There have been and are dozens of groups that I could name that sought to overthrow our country and failed.

Together all of the above relentlessly grinds away at both the many uneducated and suggestive minds and those that think “fairness” is something that can be legislated or manifested out of thin air. The result is now a self-sustaining mishmash of neo thought that collectively just stands for the denigration and destruction of America and its would-be replacement with something different, whatever that is. Far too many of us respond to intensive sloganism as a substitute for rational thought which has gone either out the window or just out of style. Sloganism is their new religion. It is the rule and not the exception, that when pollsters, journalists, or social scientists ask those rioting, demonstrating, and shouting slogans at the top of their lungs what they are their issues, or why they are protesting; they have a complete inability to explain themselves rationally. It’s obvious to anyone listening to their failure to explain themselves that largely, you are seeing the personification of George Orwell’s “Animal Farm” actually implemented in life. https://www.theblaze.com/news/2017/05/12/watch-confused-trump-protesters-say-they-miss-obama-but-cant-really-explain-why or https://www.usasupreme.com/epic-clueless-anti-trump-protesters-dont-know-potus/

Check Out Our Blog Symbolism and the Democratic Party

Here’s the million-dollar question that nobody can quite answer. Three years ago, we had a booming economy, full employment, and practically none of the many thorny issues we are facing now. I know some of you will say, well we had Trump and then Covid. All true. Trump was great for the economy and Biden has not been able to replicate Trump’s polling numbers on how positively people feel about the economy or the future. Trump had to deal with Covid and that reason alone lost him the election without any additional help from the contrived Russiagate or several other made-up attack themes. Government policies forced many businesses to close that never reopened, especially small businesses. The economy was flooded with cash by both Trump and then Biden. But the truth is that we got the Great Resignation that only began with Biden’s Inauguration and hasn’t slowed down since. Why did the public’s perception of a negative direction for the company come to be? The” Quit Rate” jumped 28% when Biden entered office, a record. Here are a few key takeaways: https://innerjoin.bit.io/resignations-have-increased-every-year-since-2010-2b88b53c7f32

A. The highest rate of checking out is in the 30-45 age group

B. Turnover is at record highs for young people

C. For those age 55 or greater, the Quit Rate is actually lower…. hmm, what’s going on?

D. The Quit Rate for women is much higher than for men.

I find no definitive information to support a conclusive statement. Therefore, I am left to use my knowledge, intelligence, and ability to see patterns, (I’m always self-effacing and humble) that are obvious to me. Here’s my take on what has happened.

A. The government screwed the pooch (an aviation term) and scared the crap out of everyone unnecessarily with generalized statements and actions that cost us trillions of dollars, our position in the world, and exploded the suicide rate among our young women by 51%! More young women died from suicide than Covid!

B. Millions of people stopped paying student debt, home mortgages, rent payments, and other forms of debt and/or expenses. This was trillions and trillions of dollars of financial relief. Millions more have not begun to either pay back the accumulated debt or even pay current debts. They are waiting for the next bailout.

C. The government gave several trillion dollars of cash in hand money to people indiscriminately, regardless of whether they had a need or not. Heck, they paid hundreds of millions directly to incarcerated individuals! Fraud is in the hundreds of billions of dollars. This is how you create inflation, and they did. This is how you train people not to work; how to become dependent.

D. Now, with the downgrading of Covid to just another kind of flu…https://patrioticneighbor.com/2022/05/09/fda-now-ready-to-admit-covid-is-just-the-new-flu/ the reality of how badly the government reacted to Covid is starkly evident. 85% of all deaths occurred in people over 60. Why couldn’t they figure that out earlier, as Israel did, and not do all the follow- on damage their decisions caused? And, they are not ready to admit their failures yet.

E. At the end of today, Americans are confused, scared, and no longer able to trust their leaders in a way not found in our history. There is so much going wrong today, that a dysfunctional government is only the tip of their concerns. Add in inflation, Wokeness, oil prices, the war in Ukraine, violent crime, open borders, and the headlong effort by democrats to socialize our country and it’s no wonder people are frightened out of their wits.

You Reap What You Sow:

All behavior is essentially learned. Yes, we have innate behavior as well, but genes only “lean on” our life experiences to modify some of those behaviors. https://www.nu.edu/resources/ask-an-expert-is-human-behavior-genetic-or-learned/ The concept of Operant Behavior was developed in the 1920s by Dr. Burrhus Skinner. His work with chickens proved to be extensible to human beings as well. Trying to explain a lifetime of work in a sentence is hard. Essentially what Dr. Skinner found was that encouraging or discouraging behaviors threw the use of punishment or reward overrode many natural tendencies. It is in that way that our society has changed natural behaviors that were thought to be innate in us all. Natural tendencies like working, forming families, contributing to society, and leading moral lives are innately embedded in us. However, that innate behavior has been overwritten through rewards for conformity and punishments for those traveling a more traditional path. https://healthresearchfunding.org/bf-skinner-behaviorism-theory-explained/

Think I’m nuts? Let’s see if you recognize any of the following as being true. Instead of working the first job for money, or, if your school gives out grades on a sliding scale, or if your social group does not engage in current events, or, you are taught in school that your self-image need not be comprised of accomplishment, just your own belief, or, you get checks from the government to attend school without having to work, or, your image of self comes from your smart device…maybe you live in an artificial construct and not the real world? Ladies and Gentlemen…we have arrived at our own Brave New World and it’s not very pretty.

And, it is not just the young whose lives have been coopted, either. Adults, particularly those under 60 are reevaluating life in general. Uncertainty is a condition that only the strong thrive in. Years and years of negative conditioning, conflicting messaging, and the abject failures of leadership on display have dispirited many and led to the Uncertainty that is now driving many of us to the exits. A nation that faces uncertainty can do one of two things:

A. It pulls together to overcome the uncertainty
B. It begins to disintegrate as the rats escape a perceived sinking ship

This is where we are today and explains so much of what is happening to us. It’s as if scientists told us that an earth extinction event was going to happen on a date certain; what would people do? Those that could deal with the inevitable would go about their daily lives, while those unable to cope would rearrange their lives to cope with the time remaining. They would check out of their normal day-to-day activities and that’s what we are seeing now.

Check Out Our Blog The Supreme Court

What Could Change Our Trajectory?

What would change that trajectory is exactly what we are trying to destroy as a society. It boils down to two things:

Everything else is extraneous to these two Tennents. One of my favorite rules is that understanding what’s important is easy. It’s keeping a light touch on what you try so as not to violate the very few Essential Truths. Never overcomplicate an issue. Unfortunately, that is exactly how government works!

Who would make a good President? Is it a creature of the swamp like President Biden? Is Trump, a businessman, a good model? How about a Constitutional Scholar like Mark Levin? Would General Norman Schwarzkopf have been the right leader? Maybe, but probably not. All would be imperfect and perhaps that’s the point. Great leaders are also fallible. Each has its plusses and minuses. All you can hope for is that they extend the kind of successful leadership that we have been blessed with in the past and is appropriate for their time. Frankly, I believe that it may be divine providence when we get the right leader at that right time. That’s not always been true. I hope that the correct individual steps up now and is more than just another symbolic representation of what this country needs to get back to where it belongs. We are way past the tipping point. It’s going to take an extraordinary leader to bring us back to our promise and potential. I hope you agree.

God Bless America and especially Ukraine at this time of genocide.