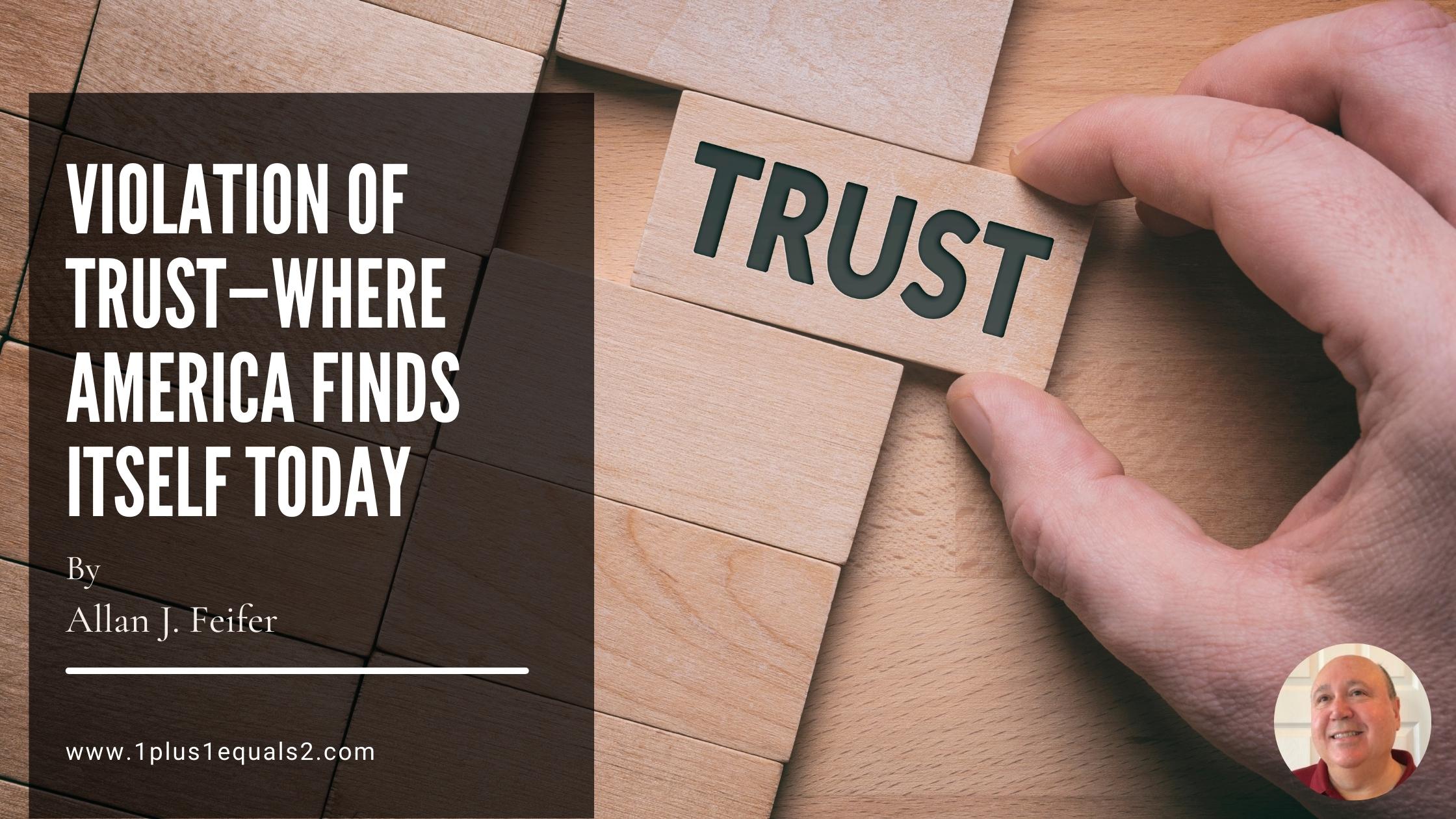 May 30, 2022 by allanauthor 0 Comments Violation of Trust, Where America Finds

It occurred to me (probably you as well) that there is more turmoil in our country today than ever before; at least as far as our lifetime is concerned. If it were just a question of the sheer quantity of issues facing our country, that might be something we could fix over time, knocking off one issue after another. But there is something else going on that is far more pernicious and for which we don’t seem to have an answer; what to do to correct the ever-steeper downward trajectory that is shaking our country to its core.

The issue at play now is that the majority of Americans have lost trust in the ability of our leaders to govern and even more insidious, whether we can depend on those leaders to tell us the truth. I fear we are simply being handled or manipulated like so much cattle. Here are a few examples that are emblematic of the breadth and depth of the issues of trust we face today:

There are so many basic issues that are just as important as the above and yes, just as disheartening and demoralizing; immigration, woke policies, education, Covid response, and even the massive issue of race-based policies setting races against each other. We could go on seemingly endlessly. Is it no wonder we don’t trust our government, its leaders, policies, and even its well-intended intentions any longer?

Fundamentally, my examination of President Biden is that he either believes in what he says or is being manipulated by his puppet masters. Historically, Biden was not known for his intelligence. It’s a fact that you can readily research to verify for yourself in many articles. Biden is a verified plagiarizer who finished college near the bottom of his class. That Biden is a documented prevaricator is easy to discover in many documents. That’s a problem for the leader of the free world and also a point that can and is being exploited by our enemies. The leader of our country must necessarily be above reproach. He represents the best of us. He cannot be either mediocre or of questionable character and integrity. How have we lost that understanding? Why are the people running for President so imperfect that we have to frequently hold our noses as we pull the lever in polling booths?

Any discussion of the deep loss of trust between America’s population and its leaders must inevitably touch upon the many statements about Biden’s purported corruption in office. In over 40 years in the Senate and now as our President, Biden has deflected, denied, laughed at, and otherwise, run away from the many allegations of wrongdoing of the purported Biden Crime Family. One of my best friends, The Queen who thankfully edits my diatribes, will frequently call “foul” on some of my sources. And, that’s the point. There are dozens of claims, allegations, and more that point to a substantial ongoing conspiracy that permeates the Biden family. But, like Hillary, the Justice Department, FBI, and other investigators and other sworn individuals perpetually give the likes of Biden a pass. Hillary was just called out for what could easily be called a criminal conspiracy by her former Campaign Manager Robby Mook. I am still waiting to hear that the FBI is not only investigating, but actually charging those that manipulated Presidential elections with false narratives they conspired to create and spread widely. God, we need to clean house. But who’s going to do it?

We have arrived at a point that I believe was intended by Biden and his acolytes, that is, an ability to traipse around substantive issues with impunity. Impunity is conferred by a legal system that is no longer even-handed and a media that simply do not report stories they don’t agree with politically. The utter disregard for breaking those sacred bonds of trust closely held between ordinary Americans and their leadership, a required sense of fealty to the principles and practices of a nation that has stood for good, stood for a better tomorrow, and been that beacon of hope to the entire world is now in doubt. That is a tragedy. And, it is entirely self-inflicted but still not challenged by rank-and-file Americans that are either disinterested or worse, have given up trying to make sense of what’s going on.

A dumbed-down electorate has effectively collapsed or just given up hope for leadership we can all trust; falling for the kind of tripe that our enemies will see and take advantage of.

May God somehow help us to undo the harm that the destroyers have wrought upon this nation before it is too late.