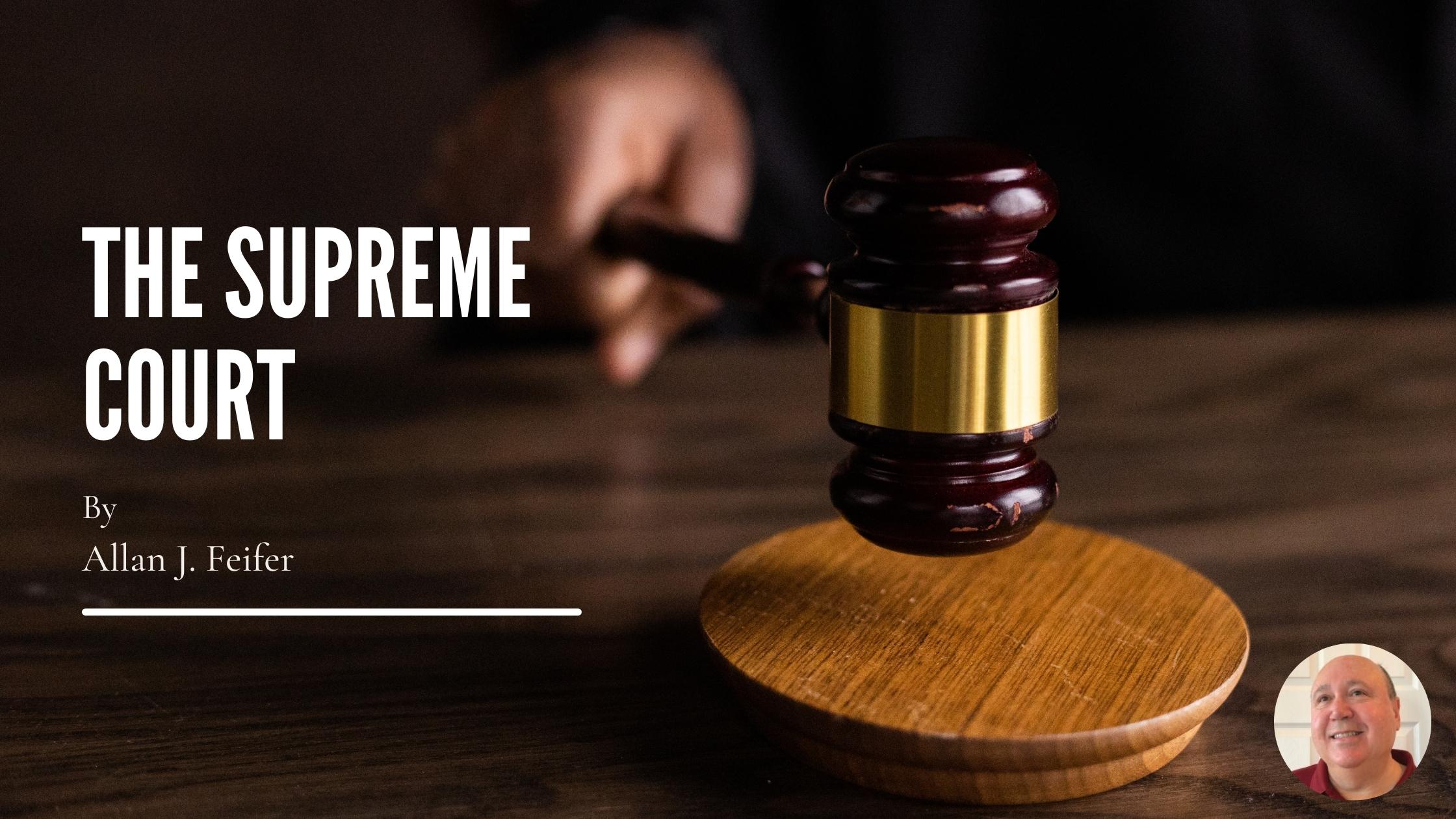 A philosophy student was given the assignment to determine the meaning of truth. He decided to ask a
mathematician, a priest, and a statistician the meaning of the simplest truth he could think of. What is
the meaning of two plus two equals four?

The mathematician said, “This encapsulates the certain bedrock of our system of calculating.”
The priest said, “Here is the clear hand of God’s guidance.”
The statistician said, “What do you want it to mean?”

I began by considering the question, “What is the meaning of a five-to-four Supreme Court decision?”
When nine of the presumably best legal scholars read the same Constitution, review the same past
precedents, and hear the same oral arguments but four come to the opposite conclusion of the other
five, what should we make of this? If it were a question on a law school exam instead of a Supreme
Court case would the minority of four fail the class? Is there something about the law they just don’t
understand?

First, the nine justices of the Supreme Court are not our best legal scholars. They are political
appointees who were chosen because they shared the same political ideology as the appointing
president. Conservative presidents appoint conservative judges and liberal presidents appoint liberal
judges. No one can imagine Donald Trump appointing the liberal Kagan, Sotomayor, or Jackson to the
Supreme Court. And no one can imagine Barack Obama or Joe Biden appointing the conservative
Kavanaugh, Gorsuch, or Coney Barrett. Despite the claim of Chief Justice Roberts, that there are no
Obama justices and no Trump justices, clearly there are.

Worse, presidents choose appointees in order to secure the support of certain groups of voters, e.g.,
Blacks, Hispanics, women, Right-to-Lifers, gun advocates, etc. Winning a second term is very important
to presidents and appeasing the right special interest groups by appointing one of their members to the
high court can buy many votes. Still, we hope that despite these unworthy considerations, the chosen
one has at least a better than average knowledge of the law, perhaps he or she is even in the top 20%
percent of those with legal training.

Second, the Constitution, which is the ultimate justification for their decisions, is terribly vague and says
very little. There is no mention of abortion, stem cell research, the powers of regulatory agencies, the
scope of presidential immunity, or many of the issues decided by the Court. Even the Supreme Court’s
ability to declare a law, presidential directive, or a regulatory agency’s decision to be “unconstitutional”
is not in the Constitution. The Supreme Court merely declared it had this power in 1803 in the Marbury
vs. Madison case.  No one has challenged this presumption of judicial power.

To be fair, the founding fathers wrote the Constitution to be relevant to the world of 1789.   If James
Madison had any idea that one day there would be fully automatic assault rifles, or that drug gangs with
handguns would terrorize our inner cities, or that Baltimore would see 350 murders each year, he might
have been clearer about the “keep and bear arms” of the second amendment. It is unfair to expect that
a few revolutionaries should, in a few pages, give us ALL THE ANSWERS to ALL QUESTIONS for ALL
TIME. The Constitution was not written to absolve us from solving our own 21st-century problems.  The
framers of the Constitution never dreamed of a world with computers, corporate monopolies, organized
crime, or instant worldwide communications. We need to solve our problems without imagining what
Thomas Jefferson, Ben Franklin, or John Adams would say about issues beyond their wildest dreams.
Unfortunately, the decisions of the Supreme Court are highly dependent upon exactly these imaginings
of the intent of the founding fathers. This leaves room for large differences in interpretation of the
Constitution.

In short, the justices (just like the statistician) can make the Constitution say anything that suits their
own political, social, or religious beliefs. The real question is whether this is a good or bad situation?
Do the justices, with their basket of biases, represent the will of America? In a country that claims to
believe in majority rule, is a five-to-four decision good enough to determine the law of the land? Does
an evenly split court represent the American will on abortion or gun ownership in the year 2022 better
than the founding father’s last will and directive?

If the justices of the Supreme Court are appointed not in spite of their biases but because of them, what
should we make of the five-to-four decision? The answer is deceptively simple. Whatever the majority
decides is the law of the land. Period. But this does raise a further question. What if a member of the
majority dies and is replaced by a justice who agrees with the original dissenting four making the
minority four the new majority? Then those who were the minority and therefore were wrong, are now
the majority and they determine the law of the land. This new opinion might change a previous opinion
that a woman DOES have a constitutional right to an abortion, to a new ruling that a woman DOES NOT
have a constitutional right to an abortion. Or an old opinion that a municipality CANNOT ban the
ownership of handguns, to a new ruling that a municipality CAN ban the ownership of handguns.   In
either case, the meaning of the Constitution and the law of the land changes to its exact opposite
without the change of a single word of the Constitution. What we want the Constitution to say or what
we believe the Constitution says is irrelevant. The Supreme Court has the last word.

Whether this is good or bad depends completely on whether the court agrees with our own opinion on
the issue. Since the country is roughly evenly divided on the big issues, each court decision will make
half the country happy and feel justified, and leave the other half claiming the decision is
“unconstitutional”. The happy half of the country will decide that the justices defended freedom,
morality, and the American way. The unhappy half will decide they understand the Constitution and
the law better than the Supreme Court, which is possible but not likely and certainly not relevant.  We
do not live in 1789, and in 2022 the Supreme Court has the last word.

In the end, someone has to have the last word, i.e., there must be a Judiciary. The founding fathers got
that right. The question is, what form should the Supreme Court take to make the law work as well as
possible for as many as possible? What will best ensure our freedoms within the framework of our
American traditions?  Perhaps the Court should be larger than the current nine, making it less
dependent on a single swing vote. Perhaps it should gradually be expanded to 15 or 19 justices with no
president allowed to appoint more than two of the new positions. Perhaps decisions that don’t have a
consensus of at least seven of nine votes should be invalid, forcing compromise and less dependence on
personal biases. Perhaps if a clear consensus can’t be reached the issue should go back to congress for
the enactment of new and clearer law.

Or perhaps the less than perfect court that we have is the best we can get, and five votes beats four
votes.