As this is written, and probably for a substantial time to come, no one is quite sure what is to be included in the nominally $3.5 Trillion Bill. At 4,500 pages, it’s 100 bills in one. You have heard it stated elsewhere, it’s the left’s way to achieve everything they ever wished for accomplished in one fell swoop.

God help America and us if this $3.5 Trillion Spending Bill gets passed.

Since the details of the bill are mainly either unknown or not even committed to paper yet, remember Pelosi’s famous line…

And, they did!! Forgive me if the details change. I assure you that the sentiments and motives have not changed.

The Democrat leadership, following whoever their Master’s wishes are, have five main objectives in this $3.5 Trillion Spending bill:

Let’s break this down:

Making it Easier for Migrants to Come Here:

It is conceivable that if Biden serves his full four years and the border situation remains as it is today, that more than 10 million people will enter the United States illegally. The government admits that over a million people have been “intercepted” already at the border through August. There is no reliable figure that I can find that estimates how many people were not encountered on the border and have just disappeared into the interior uncounted.

The recent deceit by Biden that said all the Haitians were to be repatriated turned out to be a big lie, with at least 75% of them still here and with only a fond hope they’ll be deported. Of the other 25%…. many will return to try again as it is common for those that have been deported to try to get in over and over again since there is no effective penalty for trying.

But, that’s not the worst of it. With more than 12 million illegal aliens (yes, that’s what they are) currently in the country. Biden’s cronies tried to end-run the process by putting a section into the Reconciliation Bill that gave amnesty and a path to citizenship for illegals. Only the House Parliamentarian saved the day by deciding it was an illegal use of the Reconciliation process and must be removed. Read more about that here.

But that does not mean there are no other protections, inducements, restrictions, and other enticements in the current bill designed to create even more illegal immigrants and expedite the process of shipping them all over the country regardless of background, ability to contribute, or any desire to assimilate and become Americans as we know it.

Could there be anything more foreboding than a mass invasion into our once great land? Unfortunately, what I am about to tell you comes from the realm of unbelievable, must be hyperbole, and could not, is not, possibly true.  Except it is the truth.

The United States Government wants to track your every move and in a Googleesque manner, mine your daily lives for information that inevitably will lead to control of your life from every aspect.  Read this first so you are suitably scared and outraged.

Tracking Your Every Move:

You can’t begin to understand the ramifications of the government knowing more about you than you yourself know about yourself. I’d like to make one statement right off the bat; whatever Google or other social media know about you; the government knows or has access to. Couple that with knowledge of how you spend and receive money and the picture is almost complete.

However, with information gleaned from everyone you deal with, it’s possible to backfill missing or erroneous data to a degree heretofore considered impossible to achieve. And, my friends, keep in mind this is all without a Warrant or Probable Cause. It’s the new Orwellian way of living where Big Brother is all but watching you through a two-way TV in your bedroom.

At least we don’t own Smart TVs with cameras that can be turned on remotely. You Do????? Scratch that last statement.

Recently, a friend of mine would not speak to me until we unplugged an Alexa device in the room. Too much?  Recently, he left Google completely and after downloading his files, he swears there are tons of audio files with his voice talking to people. Now, I’m just saying, maybe it is true! I know my suspicious hackles have been rising lately.

I don’t think it’s going to take much to convince you. The “Official” National Debt today is $28.4 Trillion and rising fast. As we said last week, it’s much closer to $400 Trillion counting all the other unfunded entitlements. Let’s put it in a manner that even people from Loma Linda can understand. Every dollar the government spends is borrowed. Taxes and fees don’t lower the debt. Debt is rising on autopilot.

That’s why Congress is fighting on the debt ceiling. Dems want to do away with it. To them, that would be Minerva, never having to worry about defending their profligate spending.

When, not if interest rates rise, the Federal Government will be paying more interest than what we pay for Defense. Count on it. Every new migrant, every person who chooses to not work and live off the State, creates additional debt that brings us closer to the edge of what is coming next. We’ll talk about that in a minute.

Quick, what’s the largest sector of the government? It’s not the Defense Department at about 15% of the total budget, it’s Mandatory Spending at 65% and growing. Mandatory spending on mostly unfunded entitlements like Medicare, Social Security, VA retirees, SNAP, Housing subsidies, Education, and Interest.

Think you prepaid your Social Security and Medicare? The money is gone. “Borrowed” by Congress and spent. Only IOUs in the till now.

So, riddle me this. When Aunt Jenny is expecting her Social Security payment and there’s no money, where are they going to get it? Defense spending. It’s the lowest on the Totem Pole for many lefties. Don’t believe me? Read this: https://www.jacobinmag.com/2018/09/pentagon-budget-spending-war-military

Every wacko out there is salivating at the possibility of unilaterally declaring “Peace in the World” and “War is Extinct.” If you don’t believe it will happen, you only have to read your history and see what happened after the Soviet Union fell and a Peace Dividend was declared gutting our military for a decade or more.

Who might want that? It’s a long list, friends. While their reasons may diverge, America is down on its knees and world leaders are rethinking their Treaties, Alliances, commercial relations, and much, much more. Wouldn’t you? America has become an unreliable partner that does not act logically.

Trump acted in a manner that promoted and protected the nationalistic goals and objectives of our country. You may not like how he went about it, but his objective was clear and very, very reasonable quite a few Americans felt.

As for Biden, one looks at his many “Woke” policies that are at many times fanciful and at odds with the laws of economics and physics. What track is America on?  The logical extension of what I see is an end to America and its integration into something new, something global and in the end, very totalitarian.

It will have to be totalitarian and authoritative to keep the millions in line who “will not go gently into that good night” as Dylan Thomas wrote so many years ago.

Do not go gentle into that good night,
Old age should burn and rave at the close of day;
Rage, rage against the dying of the light.

And you, my father, there on the sad height,
Curse, bless, me now with your fierce tears, I pray.
Do not go gentle into that good night.
Rage, rage against the dying of the light

Dylan could very well have written this piece for all of us who see ourselves in his words. It will be brutal and the opposite of what it purports to be in today’s popular culture. Freedom equals slavery in the Newspeak of the not-so-distant future.

As bad as everything is, our last bullet is far more important than any of our others.

Our enemies have a long-standing Influence Campaign to move us from a focus on the Individual to one with a focus on Service to the State. Make no mistake about it; being an individual is both hard and uncertain while giving up control to the State is easier, at least initially. But there is incredible risk in doing so.

The best way I can explain it is to compare it to taking anti-depressants. Without knocking the important benefits that taking this class of drugs is to some people, anti-depressants work by knocking out the high, highs, and the low, lows.

And, so it is with turning your life over to the State instead of taking on that burden for yourself. You become a child of the State and they set the meets and bounds of your life. Get too far out of what is allowed and you will be penalized. If the State says you can only have one child, they can and will hurt you if you disobey. That’s a single example out of many I could come up with.

I for one, am willing to take on the uncertainty of outcome for myself and make my own decisions and live with the consequences, whatever they are.

Next week, I hope to talk to you about China and the overwhelming process they have started to control you, wherever you live. It’s eye-opening. And, it leads us to what’s coming next.

Stay tuned and always, always, aspire to be a Patriot. 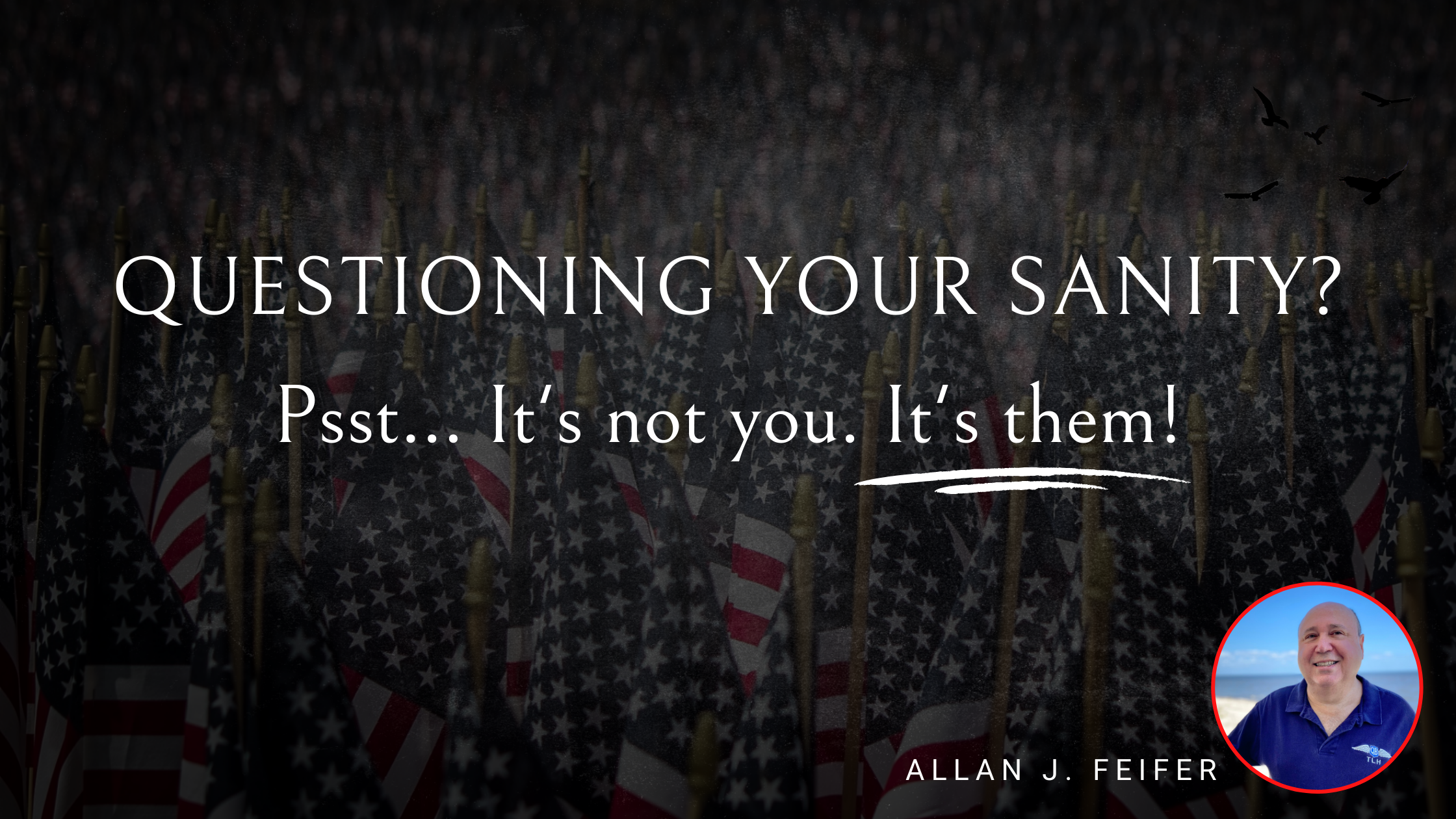 Or perhaps a better question might be: Are you questioning everyone else’s sanity?

If we are uncertain of the truth from supposedly reliable sources that tell us we’re wrong thinking; who are we to disagree? The problem is that we all should be free thinkers and if someone, even someone we trust tells us it’s dark outside, even when we can see that it is not, we begin to lose trust in traditional authority systems. Then, faced with multiple “truths” to choose from, we are left on our own to decide what to believe and what not to believe. Some of us are well equipped to discern what’s reliable and what’s not. Most are not.