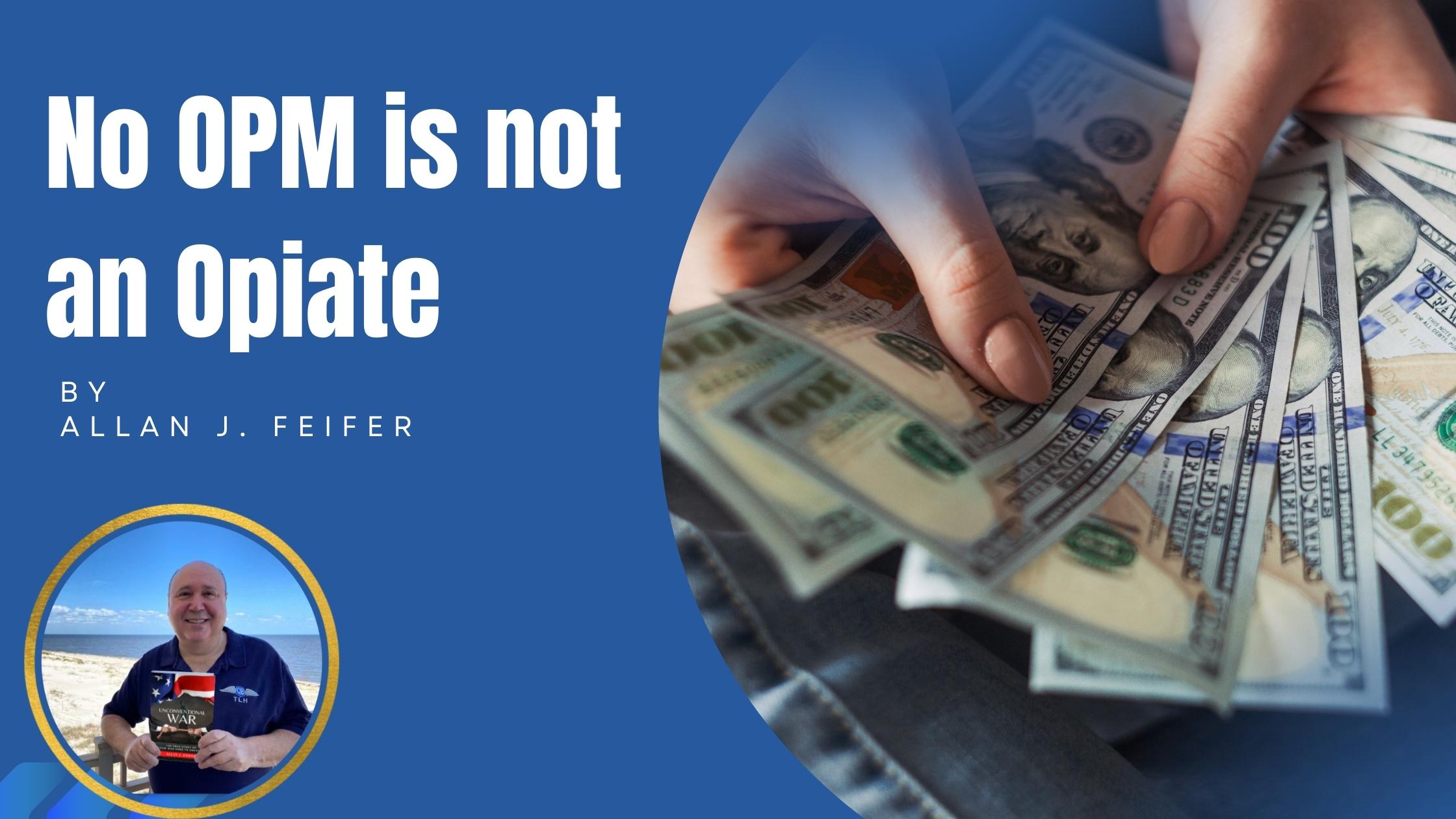 No OPM is not an Opiate

Our country must be under the influence of some kind of Opiate. How else can you explain the rush to jump off a fiscal cliff we seem so inclined to do?

Other People’s Money shortened to OPM is a slightly derogatory term that seeks to explain how our government manages to spend money they don’t have year after year. Forty years ago, our national debt sat at about 1 trillion dollars; today 30 trillion and climbing. And, contrary to some absolutely crazy people who believe we can print money and borrow without limit…it is unsustainable. The American people have been brainwashed into believing that government knows best and allows them to continue to bungle their way forward like what they do is both normal and utterly correct.

Well…I don’t think so and today I’m going to share with you an altogether different story of how we got to where we are today and how it is essential that we rewrite history or…we simply won’t survive as a nation or a society for another 50 years. To the extent possible let’s have some fun with this as we talk about something that is, in reality, not very funny at all.

Mirror, Mirror on the Wall—Who can Waste Our Money More?

Senator Proxmire is now dead and buried. A somewhat unremarkable Senator except for his now-infamous annual Golden Fleece Awards. From Wikipedia:

The Golden Fleece Award was a tongue-in-cheek award given to public officials in the United States for their squandering of public money, its name sardonically purloined from the actual Order of the Golden Fleece, a prestigious chivalric award created in the late-15th Century, and a play on the transitive verb fleece, as in charging excessively for goods or services.

Check out our America’s Evangelicals Blog

Here are just a few of some of his “award winners”:

These nine make up only a fraction of the thousands of items highlighted over the years. Think that was back then and maybe doesn’t go on today? You judge:

Has Government Simply Gotten Too Large?

Hell yes! Is there a single citizen out there that has not been totally and absolutely frustrated dealing with this or that department of the government? And, this goes for state and local governments almost as much. Let me let you in on a secret. I am terrified of the IRS. Not because I am some kind of tax cheat, but because I know that there is no one I can talk to who will take responsibility to make an issue right. And, they have the power to destroy individuals and companies without any thought at all. Heck, it might actually be a computer that controls the entire process against you! Who will be your advocate? The IRS, like all other Federal agencies, is an amorphous mass that serves its own purposes and sometimes, too frequently, the political leanings of this or that bureaucrat. Agencies designed at the outset to serve the public good but fundamentally work against that good all too frequently.

Estimates of the current size of the body of federal criminal law vary. It has been reported that the Congressional Research Service cannot even count the current number of federal crimes. These laws are scattered in over 50 titles of the United States Code, encompassing roughly 27,000 pages. Worse yet, the statutory code sections often incorporate, by reference, the provisions and sanctions of administrative regulations promulgated by various regulatory agencies under congressional authorization. Estimates of how many such regulations exist are even less well settled, but the American Bar Association thinks there are ”nearly 10,000.” https://thefreethoughtproject.com/you-break-the-law-every-day-without-even-knowing-it/

Between the fact that there are too many laws, inconsistent application of those laws, and various politically driven or even worse personal animus that government officials, or God forbid, a computer program that decides whether, how much, or when to pursue either administrative, civil, or even criminal actions against you at their discretion, is scary. The more engaged, the more exposed you are. I’ve seen this work in real life. In my business, we frequently deal with government agencies and I have to coach my associates to remember to be deferential at all times lest we make enemies of people we will need to access in the future. It should not be that way and America is certainly not the only place with government bureaucrats thinking their stuff smells better than mine. Probably the worst bureaucrats in terms of officiousness in the world live and work in Paris, Tel Aviv, or most recently Toronto. There’s a reason people work for the government and often it’s not public service!

As far as I’m concerned, that government has gotten too large and that my friends, should not be in dispute. For every real public servant, ten individuals simply think you must be tolerated. There is no solution to this. I don’t see elected officials taking on the bureaucrats; they know they’ll still have their jobs long after elected officials are no longer in office and the bureaucrats know it.

Of course, the answer to the problem is simple, cut off the money. Between departments that have no current purpose, overstaffed offices, bloated middle management, costly benefits that are superior to anything in the private sector, and absenteeism that is so flagrant that the government has to have 10% more people simply to account for it. The resulting costs are tens of billions a year. Could we cut four hundred billion current year dollars of costs a year? Read this 2012 study and believe: https://www.heritage.org/budget-and-spending/report/how-cut-343-billion-the-federal-budget

With a $30 trillion debt, every dollar saved by better personnel practices is one less dollar of debt. This is the low-hanging fruit in government. The average salary of a government worker is $109,992 plus a benefits package that raises burdened costs to about $125,000 a year! Federal workers are grossly overpaid when compared to private-sector jobs. https://www.fedsmith.com/2017/04/26/federal-employees-overpaid-underpaid/  and https://www.ziprecruiter.com/Salaries/Federal-Employee-Salary Government should freeze pay, benefits, and headcount to bring fully burdened personnel costs in line with average private-sector pay. With $250 billion being spent on pay and benefits each year just for employees on the payroll, much less just as many contracted employees, where else are you going to go to save money? Right-sizing the federal government’s headcount should be a top priority. Today, that discussion is not even on the table.

Check Ukraine and Our Strategic Interest

The interest on our national debt is approaching ½ a trillion dollars a year, which represents about 9-10 percent of the total budget. But interest is rate sensitive and today is at historically low levels. If interest rates double to about 5%, we will owe about a trillion dollars a year in interest and interest is now on track to be the fastest rising cost of government. https://shiningfinance.com/how-much-is-the-interest-on-the-national-debt We depend on other countries to buy our debt. If China, which frequently owns the most US debt at any one time were to redeem their loans, could we even do it?  We have transferred far too much power to a hostile foreign government; isn’t that obvious? Over the next 10 years, without any changes in current policies, Congressional Budget Office estimates that net interest will total $5.4 trillion a year. We won’t likely be able to pay that much and still pay our Social Security obligations, Federal Retiree obligations, or any entitlements. Without question, tough choices will have to be made and the longer we wait to figure out our fiscal future, the worse it will be.  A day of reckoning is coming, one way or another.

On to our Cautionary Tale: Greece faced a sovereign debt crisis in the aftermath of the financial crisis of 2007–08. Widely known in the country as The Crisis, it reached the populace as a series of sudden reforms and austerity measures that led to impoverishment and loss of income and property, as well as a small-scale humanitarian crisis. In 2009, Greece’s budget deficit exceeded 15% of its gross domestic product. Fear of default widened the 10-year bond spread and ultimately led to the collapse of Greece’s bond market. This shut down Greece’s ability to finance further debt repayments.

Most importantly, the measures required Greece to reform its pension system. Pension payments had absorbed 17.5% of GDP, higher than in any other EU country. Public pensions were 9% underfunded, compared to 3% for other nations. Austerity measures required Greece to cut pensions by 1% of GDP. It also required a higher pension contribution by employees and limited early retirement.﻿

Half of Greek households relied on pension income since one out of five Greeks were 65 or older.  Workers weren’t thrilled paying contributions so seniors can receive higher pensions.

The austerity measures forced the government to cut spending and increase taxes. They cost 72 billion euros or 40% of GDP. As a result, the Greek economy shrank 25%. That reduced the tax revenues needed to repay the debt. Unemployment rose to 25%, while youth unemployment hit 50%.﻿ Rioting broke out in the streets. The political system was in upheaval as voters turned to anyone who promised a painless way out.  https://www.thebalance.com/what-is-the-greece-debt-crisis-3305525 Only through a massive injection of money from other countries was Greece saved. Standards of Living have still not recovered and perhaps never will. This is the path we are following.

The United States is well on the way to becoming Greece but without any hope of a bailout from other nations. We are approaching the same level of debt vs. GDP as Greece had back then. This should scare us to death, but you hardly hear anyone sounding the alarm. https://www.multpl.com/u-s-federal-debt-percent

Time for a Revolution?

America is primed on so many levels for a revolution. Social, Economic, and Political forces have to be balanced to make our country work. We are severally out of fiscal and management balance today. We have lost control, not only of the budget but also day to day management of our government. Woke politics has us focusing on relatively trivial social issues that have taken on outsize importance and in the process have removed our eyes from the most important issues government should have a laser-like focus on such as:

Check out Our Blog – I Am the Science

The Opiate destroying our country is Other People’s Money. The day will come when there is no more money. That will be the day the world stops for not just America, but for all other freedom-loving countries that exist to one degree or another in the shade of our great land. Our enemies wait for that day with anticipation.

It is time for a change in direction fellow patriots. Either we continue on the path we are on and see our great nation become irrelevant or we chart a new path forward that makes sense. Be assured Government bureaucrats and most politicians will fight change that they see as getting into their rice bowl. It is looking more and more like the United States is on a path to some kind of revolution. Citizens will not willingly give up their lifestyles and economic security. This worries me and excites me at the same time.

Over the last year, I have become knowledgeable concerning another path forward, one anticipated by our Constitution. I urge all of our readers to go to a website at https://conventionofstates.com/ and read about perhaps our last best hope to use the system our Founders put in place just for such a situation that we find ourselves in today.  Time is the enemy. Every year that we ‘cook the books’ to make it appear that we have plenty of time to figure out how to get ahead of the coming Tsunami, we give up that precious time. It is time to become realists and figure out our next moves now, instead of waiting for a crisis to enfold that we simply might not survive.