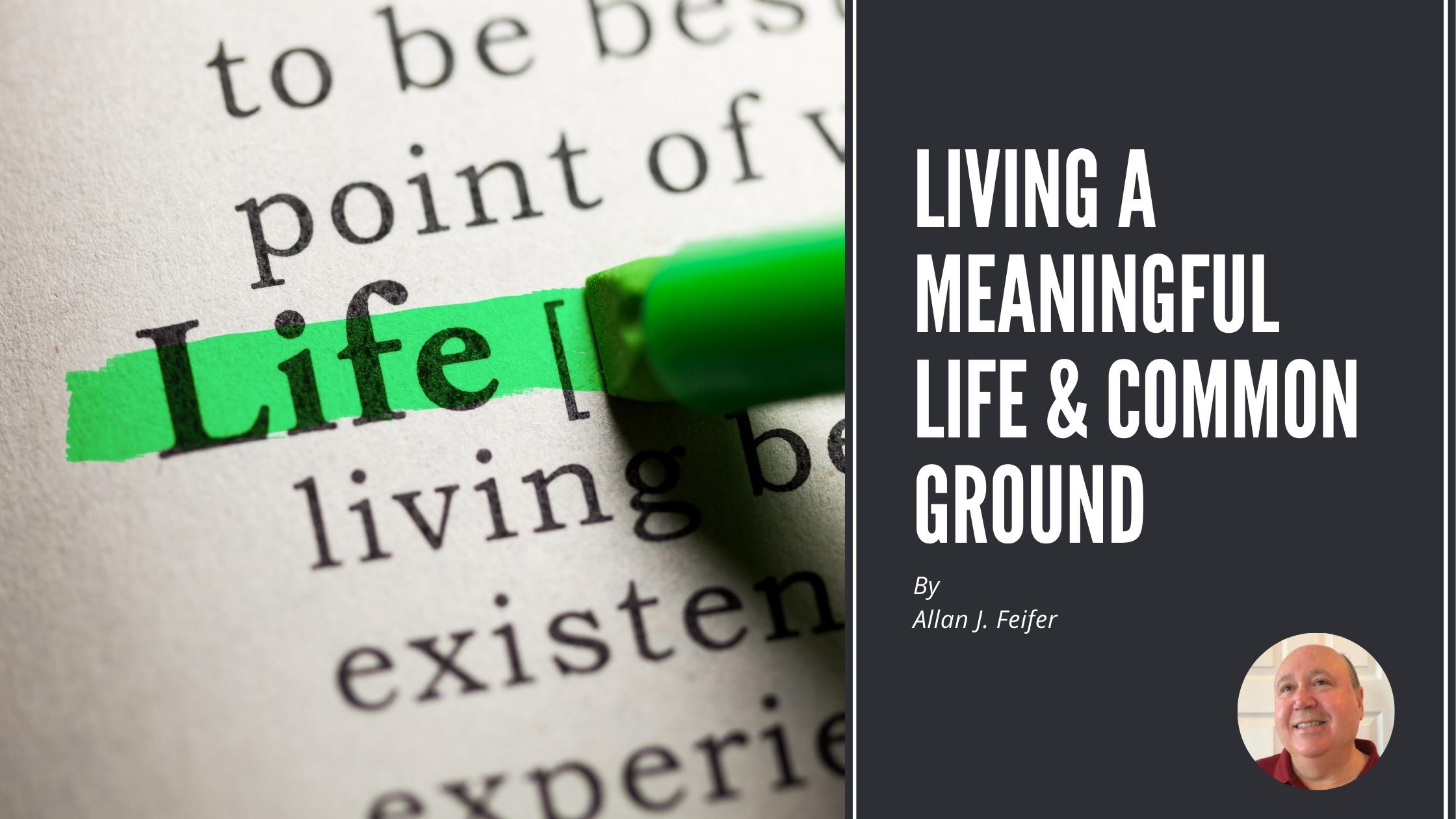 Exactly what do I mean about my code and associated assumptions and why it might resonate for yourself? The following is a series of axioms and beliefs that I attempt to use in my daily life to help me better interpret what I hear, and learn, which helps me to make better decisions. Further, they aid me in interpreting what I read and see which allows me to better analyze what is likely true vs. what is probably false. All of us wish we knew what to believe in a world of disinformation. Having your own Rosetta Stone of sorts makes that process much easier and is ultimately comforting.

Almost everyone has, without even knowing it, their own “Rules to live by” even if not formally set down on paper. I have developed these Rules for myself over a lifetime. I hope this informs, enlightens, and maybe even entertains you. Most of them I created on my own while several were passed down to me by my Father. Here we go:

I fully expect that someone reading this probably thinks I have way too much time on my hands. Others may question who the heck am I to be moralizing to others and say” If I want to preach, start a church!”  My core central belief is that each of us needs people who feel, and believe strongly in doing the right thing, regardless of the consequences or the pushback from others. Civilized society demands that of us. This is a fundamental reason I write these pieces, to expose you to ideas, concepts, history, and more…all designed to have you think and come to your own conclusions.

While you may not have formalized your belief system in a list such as mine; I daresay that all of you have certain sayings or witticisms that you believe in and possibly even recite on occasion. That’s a very human thing to do. Another very human trait that we all do is strive, at least to the extent necessary to survive. We may not be trying to dodge that next mortar or artillery round like they are in Ukraine right now, but we seek to survive financially, socially, and morally in our own lives. God help us if we are forced to shift our emphasis from that to actual physical survival; I wonder how well our own people would handle a Ukrainian-style event? Not too well I’m afraid.

Right now, ever higher inflation and the threat of a major recession are very real possibilities just over the horizon. These realities have the power to change how you live your daily life. I know it has mine. For example; right now we think before we drive long distances and we don’t buy steaks to grill as often. But our world circumstances may get a lot worse, friends. No one will be spared if our policies and decisions are made in a manner that goes against logic but is instead based on politically correct Woke feel-good theories.  That’s where the issue of good or bad leadership comes in and sets up our society for success or failure. You would think at critical times and on the precipice of a national emergency, we’d all come together. Unfortunately, we don’t seem to be able to put politics aside. Pay attention to the following quote:

“Barack Obama’s chief of staff, Rahm Emanuel, has now become famous for suggesting that “a good politician should never let a serious crisis go to waste.” Further explaining his remarks, he stated that “crises PRESENT an opportunity to do things you think you could not do before.” Fellow Obaman Hillary Clinton agreed on another occasion, arguing that “You should never waste a good crisis.” https://www.connorboyack.com/blog/taking-advantage-of-a-crisis God forgive these people. Those that would take a dangerous crisis to leverage it to their advantage are morally bankrupt.

No politician should use a national emergency to advance ideas that the general public either does not want or is deeply suspect of. Our current national leaders are not inspiring confidence in their ability and competency to meet the challenges that now confront us. That’s personally very scary. Current leadership is seriously considering a rapprochement to Iran, Venezuela, and other bad actors like China to avoid domestic pain and a sound trouncing in the next election. On the face of it, this might seem to be a good thing. But, in the long term, making deals with the Devil is never a good thing. The Devil always comes to collect. This is another hard truth of life. Be very wary of the Biden administration attempting to conflate Climate Change or deals with Iran (among others) to obtain outcomes we, as American citizens detest and don’t support.

I believe that errors of commission, coupled with errors of omission by our leadership are likely to have profound effects on our life very soon. Biden is struggling with more challenges at a single moment in time than perhaps any President since our formation. In a connected world, our enemies are assessing our strengths and particularly our weaknesses. Russia has, without question, decided that they were ready to take on the West based on a belief that not only were we vulnerable, but we had slipped to the next level; that we can be beaten. At the moment, it appears Putin has been given a stark rebuke. His belief that he could fracture NATO and the West in general, and then link up with his pals in China, has not gone his way. He miscalculated, that is obvious today. Other would-be Putin followers like China and Iran are also primed to challenge the West. Iran, being as crazy as they ever were, doesn’t see what’s happened to Russia in recent weeks and continues to bang the same scary drum as before, but perhaps China has gotten a reality check on its Taiwan designs for the moment and that would be a very good thing.

That is unless we save the lot of them from drowning as a consequence of their actions, I fear the Biden Administration may give these historic adversaries false hope, that they can prevail against the West. Which, unfortunately, the Biden administration is likely to do. Hardly anybody knows what is going on with the negotiations with Iran. Did you know, that the United States is not even in the negotiating room? That we have Russia, negotiating for us? Today, right now while thousands die in Ukraine! https://nypost.com/2022/03/12/biden-is-letting-putin-run-the-iran-nuclear-talks/ First, what could go wrong with Russia sitting in for us? Can you say “everything?” This ignores what appears to be an almost maniacal desire to resurrect one of the worst deals in American History that relies on us trusting Iran, the new deal does away with ‘snap’ inspections and relies on ‘technical’ means of verification. Iran is a proven master of deception. Of course, our leaders know that. Their overriding long-term objectives make this knowledge irrelevant.

The only reason I have come to believe as to why we would risk everything that a nuclear Iran would present to the world is that Biden needs a political win. It is that cold calculation that makes Biden every bit as evil as Putin. Both men are setting us up for a nuclear exchange. I hope you believe me and the evidence that abounds. Iran is a nation that has killed hundreds of Americans in Allah’s name. Ostensibly, we are there to keep Iran from getting the bomb. But, Biden won’t stop this madness! Once again, what could go wrong? Iran, if it gets the bomb, will use it. All bets are off if that happens. Why is it so important to a core group of Biden’s people to make believe that Iran wants to be something other than what it is…the world’s worst sponsor of terrorism.

Distorting the Truth that is America

Iran is so sure of the stranglehold it has over Biden that just the other day, multiple rockets were fired into and smashed into a US Army base and a Kurdish news channel office in Erbil, northern Iraq. According to unconfirmed reports, the missiles were launched from Tabriz, Iran. There are also conflicting reports saying that the missiles struck the US Consulate, while others say they struck a US Army base and some say that they struck both. At least five ‘Iranian-produced ballistic missiles’ hit the city in the early hours of Sunday, Governor Omed Khoshnaw confirmed. https://www.eutimes.net/2022/03/breaking-iran-bombs-us-consulate-and-us-army-base-in-erbil-iraq-with-ballistic-missiles/ The above was played down in the media and hardly commented on by the Biden administration.

Had you heard that the State Department is warning certain American citizens that Iran has “Hit Squads” here, on American soil, with plans to assassinate them? Folks, you can’t make this up. It’s truly unfathomable why we would contort ourselves, prostrate ourselves in front of our enemies in this manner. https://www.washingtonexaminer.com/restoring-america/courage-strength-optimism/iran-plotting-assassination-of-john-bolton-others-even-while-biden-negotiates-nuclear-deal

This brings us back to that old moral compass thing and all the rest of my realities that I’m sharing with you in today’s piece. It may be easier to hope for the best, but is that the operational strategy you want for our country? Periodically, we get to vote on what directs our future. There are many priorities on the table. Sometimes these are even conflicting priorities. Keep in mind that there are things much worse than high gas prices and inflation.

The beliefs we have that allow us to assess and implement vital priorities are truly the important things that we must analyze and determine for ourselves first. When we vote in November, we can’t fix everything. But, we must fix those life and death issues that can cause us to lose our place in a prosperous tomorrow. Our future is not a foregone conclusion. We as a people must find the Common Ground that allows us to coalesce around important ideas and principles. It all depends on how you and I prioritize our own lives. What will you do? It’s certainly worth your time, thought and effort. I hope you take note and become an involved citizen. We need you!

Not sure how? Reach out to me and we’ll figure it out together.

God Bless America and especially at this time of extreme suffering in Ukraine.