Reality Is Not Democratic 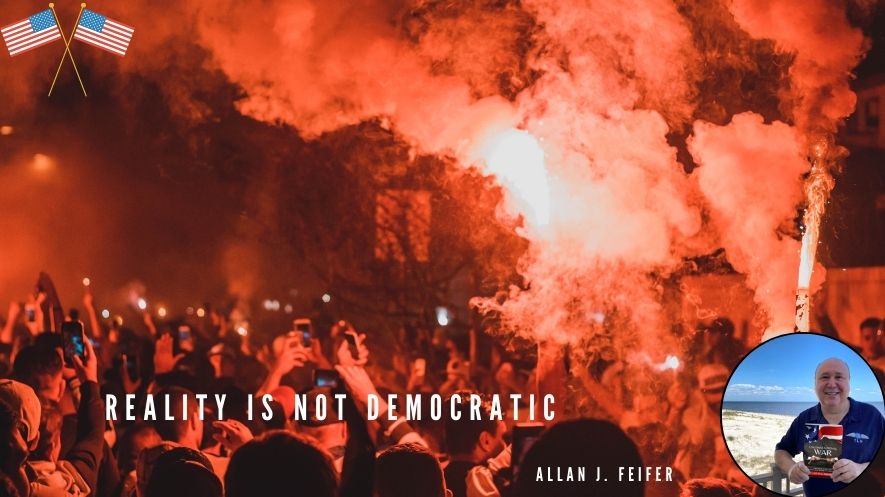 I hope each of you enjoyed your holidays and that all of us have a better 2022 than we did in 2021. I had the opportunity to read a book over the holidays entitled…” A Hunter-Gatherer’s Guide to the 21st Century: Evolution and the Challenges of Modern Life by Heather Heying and Bret Weinstein, both married to each other and both Doctors of Evolutionary Biology.

This is an unusual book. You can read it several times and still have difficulty taking in all the thoughts and conclusions resident in the book. It reads life the life’s work that it is for the two authors. There is no one essential takeaway. They start with basic biology and workup to how evolution selects traits that enable any organism to grow and prosper with the occasional dead end. What I took away in reading this book is that nothing is by accident and we learn our lessons or very often go down alleys that lead only to despair and failure. Also, that we change classic societal values at our own peril.

Several chapters discuss everything from parenting to sex to families and education among other chapters. What you understand fairly quickly is that the choices we make lead directly to consequences. Often good, but just as often, not so good. As a species, we are much more closely aligned with nature than we may think. Nature, not our wishes or desires holds sway every time. And, even if we temporarily seem to have the upper hand, nature is waiting in the wings to correct our course.

The concept of Adaptation is central to life. That does not mean that all Adaptations are good ones, but change we must. The authors use the concepts of Culture and Consciousness. Where Culture is the adaptation that we, as humans depart from our genetic programming and Consciousness are the thoughts that we can transmit to others. The last principle I’d like to mention is First Principles, the most fundamental and secure assumptions we can and should rely on. First Principles is the bedrock from which all other decisions are made.

One more takeaway from this book is the concept of Chesterton’s Fence. The idea that reforms should not be made to a system until the reasoning behind its current state is fully understood. To make this more understandable. When you come upon a gate on a road, ask yourself why is it there? Maybe there is danger beyond, maybe not. But you must ask yourself the question, is it wise to pass that gate? Life is structured as a series of gates. The rational individual must weigh the consequences of departing from the norm. Too often today, we act, willy-nilly with little thought to consequences. And, life, real-life exacts a toll, sometimes severe from departing from norms. We don’t always see it, but it’s always there just waiting to hit us in the face if we jump the wrong gate.

I was driving into work this morning and listening to the local radio announcer playing a clip from a crazy woman at a university who was screaming her view of why all white people are racists and predators. Never once did the individual consider that what she was stating actually made her a racist of the first order. We are not blind to this kind of behavior. Unfortunately, too many of us are struck deaf and dumb when we hear such tripe simply because we are either fearful of the pushback or just simply believe this is not relevant to our life and stay silent. Let me promise you, you can’t hide from these cannibals of our culture, they will come for everyone eventually.

Our title today is that Reality is not Democratic. You can’t wish something to be true that isn’t. You can’t implement a vision of life that is not fundamentally true. In essence, life is math-based. You already know our credo…1Plus1Equals2.  No amount of yelling, believing, cajoling, or wishing can change the essential reality of life. Yet, there are tens of millions of children and adults that believe what you believe is superior to the absolute truism of life. That speech is violence, that uneven outcomes constitute racism. That boys can be girls and girls can be boys. It is not so and no amount of chest pounding will make it otherwise.

Social Media is the crack cocaine of our times. And there are actual victims that can be counted. People die every day from social media. https://www.ncbi.nlm.nih.gov/pmc/articles/PMC3477910/ I reviewed several websites that claimed that hundreds of people’s deaths can be directly related to social media. Social Media reaches into a multiverse of people’s lives.

1. Teen suicide, especially young women who can’t keep up with the crowd. Or, at least they perceive the overhyped claims of other social media posters and influencers.

2. Riots. Hundreds of people have died in the last several years who were attracted to act out their worst demons to loot, destroy, burn and murder all across America.

3. Situational ethics. Social media espouses a life that is not real. Yet, millions of us attempt to emulate that which does not exist. Stress to keep up with an altogether fallacious existence abounds leading to predictable bad outcomes.

4. Business. Productivity in American business is compromised by the theft of time spent by employees who spend hours each week on social media instead of doing their job. Some years ago, I requested and received a breakdown of time spent on certain social media sites within my own county. Approximately 20% of the total traffic from our county was to several well-known social media sites. I suggested blocking those IP addresses but the draw was so powerful, there was no support for blocking those sites.

5. Health. There used to be about a million MDs in the United States. Today, there are better than a hundred million. How did that happen? Why do we see so many ads for medicines and treatments on TV and in print for ailments that we never knew we had? Today, many of us are our own doctors, essentially prescribing various cures, remedies, and drugs for our self-diagnosed afflictions. Which of course are wrong, the vast majority of the time.

6. Politics. There is no end to the number of curated sites that abound for whatever belief you have. From pacifist to activist to doomsday, just tune in to your favorite website, podcast and you’ll be comforted that your own personal belief is correct and everyone else’s is wrong.

We could go on, but you already understand that social media has had a profound effect on us. That leads us to the next layer of the onion. Who controls what we see, hear and believe? As bad as individual sites can be, that danger pales in comparison to the wizards behind the curtain that skew what you can see in order to achieve this or that effect. Want more eyeballs glued to the screen? Just cater to those demographics interests and beliefs and you are there. Want more people buying your product? Hire an influencer to pedal whatever it is that you are selling and watch those automatons go out and buy whatever you are selling that is now a must-have item. Conformity through brainwashing.

What’s the worst thing social media could accomplish if the puppet masters behind the curtain wanted to?

• Lead a country into Marxism?

Somewhere along the line, probably without malice or intent, Zuckerberg figured out that a successful algorithm to be successful needed to keep eyeballs looking at screens. This then led us down the path to the societal evil that social media has largely become.

At its core, social media is an alternate reality that has tentacles everywhere. In gaming, dating, business, politics, commerce, medicine, and myriad other spheres of influence, social media is replacing traditional methods of expression, social contact and so many other traditional ways of living that we no longer recognize our authentic selves. And, that’s the problem. We are becoming inauthentic versions of who we can be, should be. At least as adults, we remember what it used to be like to live and interact. God help the under 30 crowd who thinks and lives like social media is real and must be believed. What future does it hold for those that believe that life is like the Matrix except you don’t have to swallow a Red pill to be included!

So perhaps we should modify our title a bit from “Life is not Democratic” to “Life is What You Believe?” Most adults understand the absurdity of the last statement. The young (and more than a few adults) believe that life is an arbitrary construct that can be molded to fit one’s perception of reality. What allows for this view is the constant hyping of pop culture, liberal policies, companies that know better but adopt crazy nihilistic rhetoric to make money, and government that lacks a moral compass and empowers and protects actions that will ultimately slit the throats of those that participate in this ultimately suicidal conduct. Society can’t exist forever when we attempt to suspend the physics of life that are just as tightly bound in logic as the physical laws. We have created a generation of frail individuals. Nature is anti-frail. The frail will perish over time. Here are some modern-day concepts that have been turned on their heads through the efforts or consequences of social media.

1. You need not work; you are entitled to a share of societal wealth. You are entitled to everything society can offer, i.e., food, medical care, education, housing, and entertainment without producing anything

2. Equal outcomes should be available regardless of our abilities or desire to strive

3. That what I believe is equal to what you believe because everything in life is situational

4. Life is not fair and therefore government must adjust our lives to make things just for all

5. Enjoying life, i.e. pleasure is more important than the traditional requirements of raising a family, earning a living, or sacrificing in general

Folks! We have arrived at our destination. We have pseudo anarchy ever-present in our daily lives. What’s startling to me is the lack of pushback against what is fantasy. False focus on greed, envy, and popular culture that is bereft of useful value in favor of a version of society high on itself for no good reason just boggle my mind. What will stop this craziness? Maybe another, major war or some kind of mass die-off of those that simply exist in the real world anymore. One of my friends thinks even hunger would not change the mindset of most who are deeply indisposed to logic and reason.

In the natural world, nature abhors a vacuum and/or genetic dead ends. Nature strives to gradually introduce adaptations that work and cut off those that don’t make biological sense. We are witnessing a major turn in evolutionary biology. The weak will not make it long-term. Their progeny will not become stronger, only weaker. The Chinese understand this. Russia understands this, conservatives suspect it but don’t quite get it yet. We need to understand that freedom also entails responsibility. Largely, responsibility is what is missing in the current mix and is inherently juxtaposed against the basic thesis of social media; which is largely about self-aggrandizement.

Tolerance for variations in human conduct is good to a point. When they become self-destructive it inevitably leads to the conclusion that Life is not Democratic. It favors, what makes sense. We are not seeing individuals going through phases, we are seeing a change in who we are. The future is much more uncertain than it should be. And, our enemies are depending on it continuing.