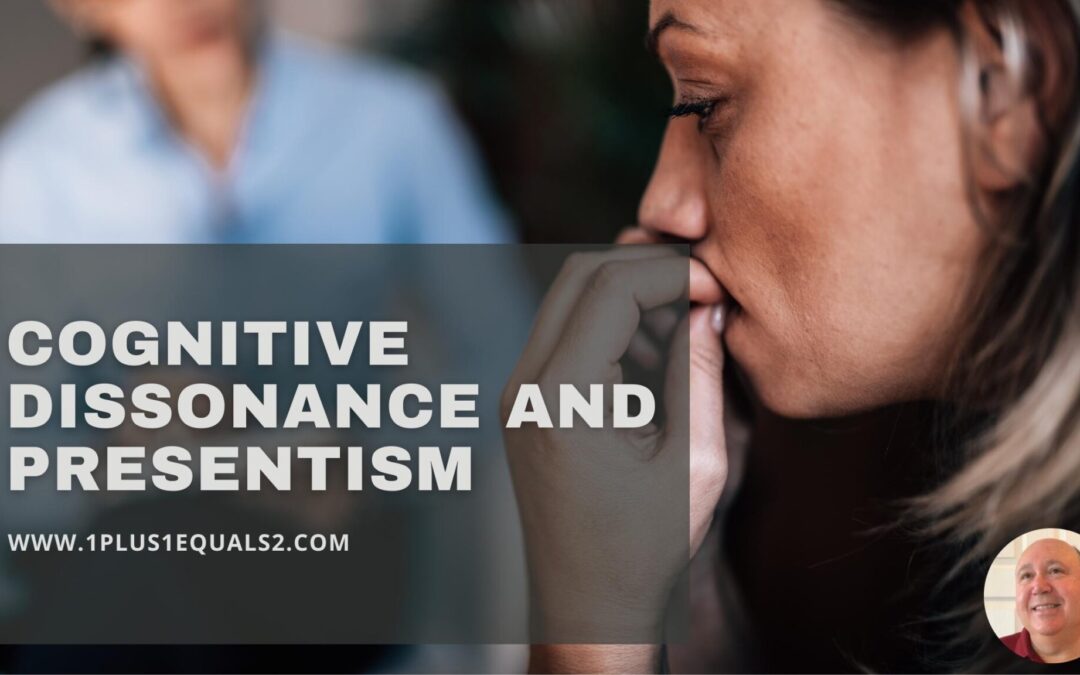 The definition of Cognitive Dissonance is the perception of contradictory information, together with the mental toll it takes on us. Relevant items of information include a person’s actions, feelings, ideas, beliefs, values, and things in the environment. In simpler terms, it’s the numbing effect of a fusillade of difficult-to-comprehend information overlaid on what you thought was true, based on your own life experiences.

Now, there’s an additional phenomenon that has our Cognitive Dissonance boosted by an inoculation of something called “Presentism”. Take a moment to get your head wrapped around this. Presentism is so illogical and morally and ethically destructive that little we know survives it. Merriam-Webster defines Presentism as “an attitude toward the past dominated by present-day attitudes and experiences.” George Orwell’s 1984 had a companion concept called ‘Doublethink’ that fits nicely into this relative space. Doublethink is the act of holding, simultaneously, two opposite, individually exclusive ideas or opinions and believing in both simultaneously and absolutely.

How many of you remember the earliest computer game, Pong? If you maneuvered just right, you could get the ball to bounce perpetually between one side and the other. It’s exactly that way with Cognitive Dissonance, Presentism, and Doublethink. Illogical presentation of facts that, when done frequently enough, will rewire your brain to readily believe the unbelievable. I believe this is where we are today. And, by the way, we used to call this brainwashing.

Typically, the older we are, the more knowledgeable and wiser we should be. Have you noticed that it’s not our youth dropping out, but our wiser and more worldly individuals who have gleaned the lessons of life that age traditionally confers? They just can’t process their life experiences vs. what they hear or read, delivered by media and thought leaders who themselves inspire little confidence. When the subject is history often what they have to say and what you know to be true, just don’t jive. We used to call this propaganda.

Americans who have worked hard for what they have achieved are scared to death that everything they have depended on, everything they believed in, and everything they built is at risk and that there is no authority, no government in which they can trust and rely on. They fear that no one can give them the assurances they desperately seek. Now, what we are seeing is an entirely new society of entitled and reactionary anti-leaders. If you are over 50, compare what your belief system is, vs. what you are being told and, yes, even being herded into a nihilistic philosophy that rejects foundational assumptions and realities of just about everything:

So, there it is. It is out in the open for all to see and digest. Some believe America is Satan’s crowning achievement. You will not change their minds. Already, the deck is stacked against us. What will we do to forestall what seems to be unstoppable at the moment? That’s the question I hope all of us think about.