Washington is Running Out of Your Money to Spend 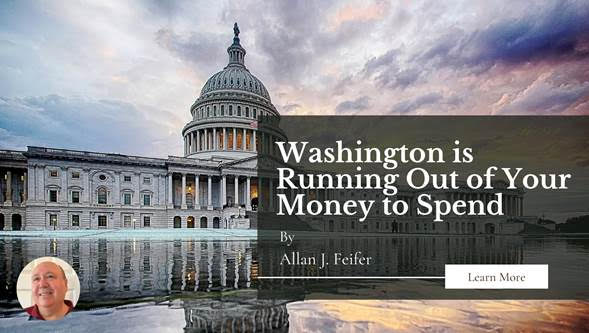 Democrat leadership is frantic. But not for the reasons you may have heard. The just-passed Inflation Reduction Act is one of the largest revenue-raising bills ever passed. Slated to raise $725 Billion over ten years through raising the corporate minimum tax to 15%, Billions for assumed Prescription Drug pricing reforms, and $128 Billion through enhanced IRS enforcement. The promised $300 Billion debt reduction is a farce and will never happen. That’s the public face of this very misleading bill.

Let me share with you some of those mysterious moving pieces I’m always talking about. Budget tricks are legion. Let’s look under the hood at the issues at play.

Issue I: The National Debt now stands at naat about $31 Trillion and rising fast. The estimated shortfall in this year’s budget is $1.15 Trillion. Trillion-dollar budget deficits are slated to continue to rise indefinitely. When we have a deficit, as we do now, we owe that money frequently to foreign countries like China and Russia. Just as important, the change from a creditor nation to a debtor nation influences how we are perceived in the world and reduce our political capital. Keep in mind that these countries are now “investors” in our country and, that we would not like to see wholesale redemptions from them. This is self-induced blackmail. Becoming a debtor nation has no upside.

Issue II: Interest on the National Debt is swamping us. “Over the next 10 years, without any changes in current policies, CBO estimates that net interest will total $5.4 trillion and become the fastest growing component of the federal budget. In 2031, interest costs would account for 12 percent of the entire federal budget.” That is more than double the current percentage. This means there will be less money available to run our government.

Issue III: Entitlements. Entitlement spending is about to surge. Why? President Biden will have brought in somewhere between 6 to 9 million illegal immigrants by the end of his term if the current rate continues. No one knows if that rate will slow or God forbid, increase. The majority of those immigrants will likely become eligible for entitlements in one form or the other. The growth of entitlement spending was steeply up even before the border onslaught. Entitlements now make up more than 51% of the Federal Budget. This percentage is likely to increase, squeezing out other discretionary government spending and threatening national defense.

Issue IV: The number of working Americans is not growing commensurate with our population. Less than half of us work. And of those that do, older Americans are skewing historical numbers by working longer and returning to work after retirement for economic reasons. This fact is rarely tracked and is not a good sign. Millions of young people are delaying their entry into the US labor market by staying in school longer than in previous generations and on credit to boot. What is that telling us?

Issue V: The world is becoming ever more competitive. Our multinationals have sold our seed corn, i.e., our Intellectual Property to other nations, by creating Innovation Centers all over the world, staffed by local highly qualified STEM graduates as a result of America’s deficit of qualified grads. This has come to pass as we become a nation of service workers rather than the innovators we once were. Whether these Innovation Centers are owned or controlled for now by US companies does not stop technology transfer. America must critically focus on regaining our “Can Do” spirit and incentivizing work and effort; the opposite of what we do now. Our focus on social issues and a perceived climate threat see our competitors all over the world laughing at us. The United States has voluntarily given up its competitive edge. I find this stunning.

Issue VI: The US is in an expensive proxy war with Russia.
The United States has spent or committed to spending $54 billion, so far on the war. It’s an entirely different matter of the “why” and “what” for this. Just keep in mind that we are just as committed financially as we were in Afghanistan and Iraq, just in a different way.

We have not been transparent with the American people. Whether it is taxes, social programs, or military adventures, the American people need to be read in. We don’t do that at our peril as it sets up a dynamic of one party criticizing the other. And, in doing so, we destroy our needed unity and are frequently forced to retreat after spending our blood and treasure. What a tragedy. While we likely won’t get to universal agreement on much, treating thinking Americans as adults is essential to the issue of trust.

We have voluntarily given up our position as number one in so very many technical and industrial areas, from building aircraft to steel making, from leading in Chemistry to mining. Decades ago, I visited a GE “lights out” dishwasher manufacturing facility. At the time, I thought that was our future. To use our advanced technology to reduce the labor content of formerly labor-intensive products. Today, those dishwashers likely are built in China or Mexico.

Certainly, the model for advanced technology factories did not play out as imagined. Our technology was up to the task; however, political factors crept in and changed the calculus. Perhaps we traded it for broader worldwide access. This has certainly been the model for many other products and services.

Why do we work against our own best interests? You only have to look at the Alinsky Model, breaking the American government financially, for that reason. Only by equalizing poverty through the destruction of existing systems can the few radical Marxist hope to reboot America’s engine into an egalitarian, socialist utopia. Beware, the powerful adherents of Mr. Alinsky which include Bill and Hillary Clinton, Barack Obama, Richard Cloward and Frances Fox Piven (the Cloward-Piven Strategy), Bill Ayers, Bernadine Dohrn, and Frank Marshall Davis, just to name a few.

Look over the American political landscape and view their progress visible in rampant immigration, indoctrination of our children, our young people sucking up resources as they stay home or work at menial service jobs while holding costly undergraduate and advanced degrees. Entitlements growth is out of control. People go on disability at younger and younger ages to avoid working. The entire redefining of who we are is centered on Identity Politics rather than the importance of a great work ethic, the value of free speech, and the understanding of our history. Lost along the way is the importance of “We the People” to the success of the America in which we live, faults and all.

One day, a desperate need to access more capital may find us forced to make painful choices that will inhibit our ability to govern and lead, based on historical precedents that have kept us in good stead since our founding. We are far along in a process of incremental societal and economic change that reflects our new reality as we now face what it means in practice to be a debtor nation.