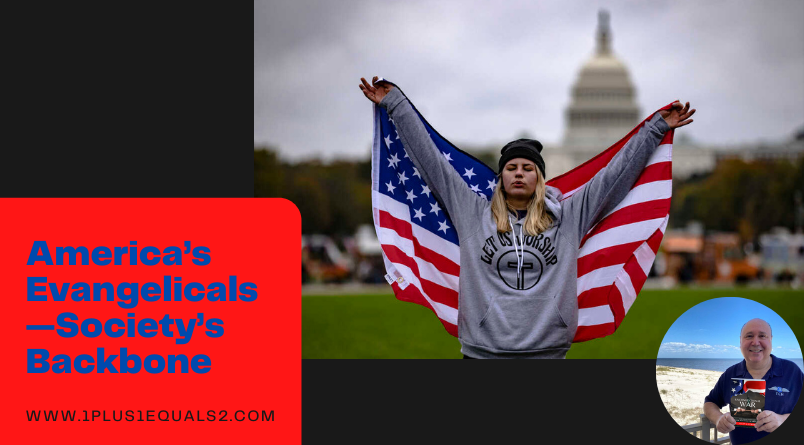 Every movement needs an army of believers. And, the millions of American Evangelicals are that army. Today, we’ll talk about why we can’t make it back to an America that was so exceptional that the entire world either appreciates us for the good we’ve done; or ensures our enemies continue to fear us. Too often, we make the mistake of believing that our country is just another country of many and why should we hold greater sway than other nations? Today we’ll talk about this subject and several more. Let’s start with why America is God-inspired like no other nation in the world.

According to Customs and Border Patrol, people are coming across our northern and southern borders from more than 140 nations. Today, we are not focusing on the issue that we are being overrun by God knows who is coming across the border. Rather, just the fact that so many people, from so many countries, who might have chosen so many other countries to come to, have decided to come here. Social benefits are better in Europe. Other countries are closer and easier/cheaper to get there, but millions and millions choose to come here instead. 150 million people would like to come to the US if they could figure out how.

And, these are not just Central Americans. Rather, they are Chinese, Nigerian, Indian, and many others. I think it is striking that in this poll China leads the group of people who want and do come here to live permanently, legally and otherwise. Why? You do not have to ponder the question long to realize that they believe that America is special. Why the heck do an ever-increasing number of our own citizens feel differently? That’s a great question which we’ll attempt to answer today.

To understand the one best answer, I can share with you, look back to our founding and understand the diversity of people who mostly willingly strived to get here and the reasons they came. It boils down to five issues:

With the notable exception of those forced to come here against their will, everyone else came at great expense, risk, and travail with the hope of a better life than the one they left behind. Not all made it. And, when they got here, frequently their journey was not finished; they traversed our country from North to South and East to West. No jumping on an airplane at government expense! The traditional view of the best and brightest was frequently true. What made our country work though, are the morals, ethics, and community that settlers brought with them. Almost always, religion was at the center of every successful New World community. At its core, Judeo-Christian Values are the values supported by Christian and Jewish beliefs. These values include charity, empathy, kindness, generosity, courage, service, peace, and love. Inscribing these values in our societal DNA only lacked one other element to get us to that plane of American Exceptionalism…. capitalistic values.

America has a complicated relationship between capitalism and religion. There is a basic struggle between the tenets of the two that has not been resolved to this very day. I have friends who have told me you can’t be a Christian and be a business owner. I respectfully disagree even as I understand what my friend was expressing; saying human values are frequently in conflict with capitalistic greed. Yet, it is capitalism that enlarges the pie and allows for generosity and the lifting of all boats that simply would not happen without personal greed. That’s why no socialist or communist system ever succeeded. Why strive when you don’t receive your rewards in proportion to your effort? Virtually everyone hates freeloaders! Only a few zealots buck that truism, and for how long? Kibbutz in Israel has largely become nostalgic or become part-time i.e. get back to your root’s endeavors. Know any successful communes? Even American communities of Mennonites and Amish struggle to stay intact and certainly aren’t expanding.

Yet religion is not passe or irrelevant as many people might believe. Religion and what it brings to society are essential not only for maintaining the fabric of society but as a guide to daily living. Not only Jews and Christians, but any monotheistic religion that espouses similar principles are the bedrock for every successful society throughout history. In America, it is evangelical Christians that make up the largest segment of God-centered individuals in the country. And they are indispensable, not only for their beliefs but for the actions they take to ensure our country stays on the right path, morally, ethically, and especially, for our purposes, politically. Like the clarion call it should be, evangelical and other religiously centered communities need to use their influence to ensure government works on principles that reflect our beliefs. Never intended to be Godless, the government has moved from being God-based as the Founders intended to just plain Godless.

John Locke (1632–1704) is among the most influential political philosophers of the modern period. To my mind, God’s Law is inexorably interlinked with Natural Law. Locke stated: “Natural law can be discovered by reason alone and applies to all people, while divine law can be discovered only through God’s special revelation and applies only to those to whom it is revealed and whom God specifically indicates are to be bound.” https://plato.stanford.edu/entries/locke-political/ Locke thought these were two separate states of being, each standing on their own. However, there is such a high degree of borrowing between the two that I cannot see a material difference. This is important because it gives religion the entrée into government that is essential and that was intended by the Framers of the Constitution. A careful reading of many of the Founders’ public and private communications demonstrate they had the following in common: (1) belief in a personal God, (2) familiarity with the Bible, and (3) belief in prayer. While no state religion was to be tolerated, a belief in the central requirement to obey God was so common, it need not have been stated and it generally was not. We are a religious nation by birth, tradition, and necessity. Anyone who tells you otherwise has their own agenda or is just uneducated.

This understanding is important for religious and non-religious individuals to understand. That while God comes first, we must recall General Douglas McArthur’s speech in 1962 at West Point that clearly articulated the hierarchy of Duty, Honor, Country that McArthur so clearly laid out that day. The absence of any mention of family is not an oversight. McArthur was a devoted family man who was only limited by his adherence to the mantra of Duty, Honor, Country. This very religious man ordered his life according to his priorities. Below is a prayer that reinforces that point that he later became quite famous:

Duty to self, family, country, and God are completely consistent for someone who’s religious but yet lives firmly in the secular realm. I hope that each of our readers understands and appreciates that one can be religious and still have a responsibility to protect our way of life by participating in vigorous and oftentimes contentious political discourse.

An Evangelical’s Duty—and everyone else who believes in God

America is a sacred place, even our currency states “In God We Trust.” The entire country is a sanctuary, both literally and physically. Believers like us pray every day for what is important to us and for a right good nation. That pesky word ‘responsibility’ comes up again and again. God provides for those that provide for themselves. And, so it is with our national body politic. It needs God and needs those that believe in him to take the proverbial shovel and start digging. We can’t expect good outcomes to happen by divine providence all by itself. A long time ago I read something like only one out of 10 of us will ever write their elected representative, one out of 25 will contribute to a campaign or for an issue they support and one out of a hundred will work on a campaign or for some political issue that is important to them. Nothing happens until you decide to become involved and give it the priority it deserves in your daily life.

You don’t need me to tell you what’s at stake. The future of our children and grandchildren is hanging in the balance on so many different levels. You may have had a good life going for you at the moment, but so much has changed for the worse that if things are left as they are, your children and their families will not enjoy as free a life as you have had and their opportunities and world will look much smaller and limited. Now is the time to assert ourselves while we still can. As a true believer, how can you not take a more active role in our country’s future? Your future religious freedom is very much on the line. Did you see the video of the policeman in Australia walking into a church service and stopping it to make sure everyone who was there had their masks on? Think it could not happen here? Think it will stop at that?
https://www.mystateline.com/news/international/police-stop-church-service-to-make-sure-parishioners-are-wearing-masks/

There are times in life when it’s right to sit on the sidelines and watch the parade go by. There are other times when no ethical patriot can turn a blind eye to the terrible state of our once-great nation. We have been cowed on the world stage and at home. Edmund Burke famously said over 200 years ago:

“The only thing necessary for the triumph of evil is that good man do nothing.”

Fellow Patriots, believers in God and defenders of what is good and right and in opposition to evil, what say you? Will you stand up and be a soldier of God in this struggle between Good and Evil? The choice is yours. Decide to stand up for what’s right or by default you stand opposed to what is right and just. Become a soldier in Gideon’s army. I’ll stand with you!

If you agree with what was discussed here today consider as a first step consider forwarding this discussion to your Pastor, Priest, Rabbi, etc. This would make a great Sunday School topic or sermon from the pulpit. A truthful discussion of the evil and wrong facing all of us must start someplace, why not among those that believe in the truth and the light and your place therein? Doing nothing, Burke understood aligns you with evil. What you do, or not do, inscribes you, one way or the other in the Book of Life. How do you wish to be remembered?

Allan J. Feifer is an outspoken patriot lifelong conservative author & Inspirational speaker. In light of recent events, Allan felt compelled to write his new book after he and others felt helpless watching the destruction of what was once the undisputed greatest nation on earth. Stay connected with Allan’s blogs for more awareness.